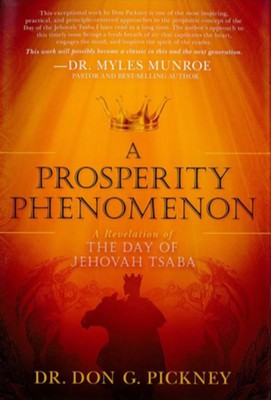 The economy is in shambles. Riots and demonstrations in the streets have become daily occurrences worldwide. The unemployment rate is staggering, global debt is out of control, and the world is paralyzed in the grip of terror. What in the world is going on?

What if all of this could be happening just for your benefit as a Christian believer? What if we are experiencing a great global orchestration of God's ability, plan and purpose to transfer the immense wealth of the world into the hands of those who serve Him? And what if this prosperity phenomenon forecasted in Scripture has already begun?

Dr. Don G. Pickney's ministry is dedicated to proving that on the fateful day of September 11, 2001, the Lord of hosts began to unfold a biblical prophetic event revealed in Scripture as the Day of Jehovah Tsaba, during which He would plunder the nations of their "created glory"--their wealth, goods, substance, means, men and other resources--converting it into the hands of the righteous, a happening already being widely forecasted in charismatic Christianity.

Insightful and thought provoking, A Prosperity Phenomenon will offer you a renewed sense of hope in the midst of global turmoil. This God-given message of purpose and prosperity will encourage you to face uncertain times in a different light, reminding you that God is in control and faithful to those who love Him.

▼▲
Dr. Don G. Pickney has a gift for providing exceptional insight into Scripture, reaching into the unsearchable riches of Christ to bring forth divine secrets for the church. An accomplished teacher with 38 years of full-time ministry experience, Dr. Pickney is known for proclaiming to his congregation, “I’ll never take you where the Word of God doesn’t go!”

Since beginning his continuous full-time ministry in April 1974--the same year he was miraculously healed of several incurable diseases--Dr. Pickney’s prayer has been, “Father, I thank You for accounting me as a minister of Christ, and a steward of the mysteries of God. I pray that I may be faithful to that calling--that I may speak boldly, and make known the mysteries concerning Christ, unfolding them, and making them clear, as is my duty. I thank You, Father, that Your Word will run its course, and be glorified and triumphant in this earth.”

Dr. Pickney is the author of 16 books, and has published 165 songs as a singer, musician and songwriter. He and his wife of almost 30 years, Olene, now make their home and ministry headquarters in Scottsdale, Arizona, where he currently conducts the “largest home Bible study in the world,” globally webcasting each week from his home to thousands of viewers.

▼▲
This erudite, eloquent and immensley thought-provoking work is indispensible ready for anyone who wants to understand the principles of glory and the prophetic concept of the Day of Jehovah Tsaba and how this revelation affects your relationship with God. This is a profound authoritative work which spans the wisdom of the ages and yet breaks new ground in its approach to understanding the keys to understanding a unique perspective of the divine. This book will possibly become a classic in this and the next generation.

This exceptional work by Dr. Pickney is one of the most inspiring, practical and principle-centered approaches to this subject I have read in a long time. The author’s approach to this timely issue brings a fresh breath of air that captivates the heart, engages the mind and inspires the spirit of the reader.
The author’s ability to leap over complicated theological and metaphysical jargon and reduce complex theories to simple practical principles that the least among us can understand is amazing. Enjoy this book and let its pages of wisdom inspire you and expand your faith.
—Dr. Myles Munroe
Pastor and Best-selling Author

▼▲
I'm the author/artist and I want to review A Prosperity Phenomenon - eBook.
Back
Back