Skip to main content
A Proper Pursuit
By: Lynn Austin
Stock No: WW228919 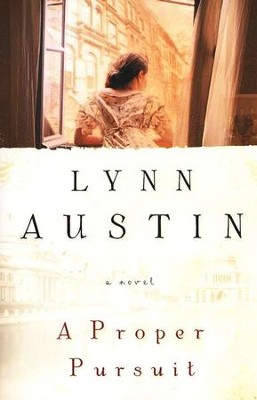 ▼▲
When Violet Hayes ventures to Chicago during the time of the World's Fair, her one goal is to find her mother, who has been missing from her life since she was nine. Naive, impressionable, and highly imaginative (having secretly ingested a diet of romance novels and true crime stories at school), Violet stays in Chicago under the care of her grandmother and her three great aunts. It is here that her perspectives on life are opened as she is exposed to the world about her, from high society to the poor immigrant families; from the suffragette movement to the security of a suitable marriage match. As Violet contemplates what course her life will take, she will discover the missing parts of her family's past, and ultimately, Violet will discover herself.

▼▲
When Violet Hayes ventures to Chicago during the time of the Worlds Fair, her one goal is to find her mother, who has been missing from her life since she was nine. As Violet contemplates what course her life will take, she discovers the missing parts of her familys past and, ultimately, herself.

▼▲
Lynn Austin, a former teacher who now writes and speaks full time, has won seven Christy Awards for her historical fiction. One of those novels, Hidden Places, has also been made into a Hallmark Channel movie. Lynn and her husband have raised three children and make their home near Chicago, Illinois. Visit Lynn's Web site at www.lynnaustin.org

▼▲
Lynn Austins novel, A Proper Pursuit, tells the story of a young womans journey from girlhood to womanhood. Ms. Violet Hayes tricks her father into allowing her to stay with relatives in Chicago under the false guise of wanting to see the Worlds Fair. In reality, she wants to find her mother, but upon arriving she discovers that each of her hosts has a different agendaand suitorready for her. What follows is Violets struggle to unearth her past, determine her future, and enjoy the present.

Austin tells the tale completely from Violets perspective, describing events as they happen. This becomes a little confusing, due to the amount of people and situations the heroine is introduced to, but also adds more depth to Violets point of view and is worth it in the end. The characters in the story are varied and interesting, and though they develop and become more complex as the book moves along, the bonds between them do seem rather weak and fragile, usually with nothing but society or family ties holding them together. The few exceptions are the relationships between Violet and Mr. McClure, and Violet and her mother. In fact, the most memorable scene in the book occurs when Violet finally locates her mother, and discovers just how much the worlds cruelty has affected all of their lives.

At the beginning of A Proper Pursuit the plot is rather simple, with Ms. Hayes seeking out her runaway mother in Chicago. But as time and events progress, Violet finds herself with a line of suitors she must choose from before the months end, which complicates her life just a little. More than that, she must decide what standards she will live by for the rest of her life: societys, Gods, her familys, or her own. In the end, she chooses to live out her own heart instead of her familys, to change society instead of being controlled by it, and to honor God by being herself.

Although the headstrong Violet begins the book as an incredibly naïve character, she grows and blooms throughout the story in a very realistic way. She is the only truly dynamic person in the bookall of the others are used to represent the different forces that are pulling and pushing on her as she makes her decisions. A good example of this is shown in her four primary suitors: Silas, who symbolizes her own desires; Herman, who is an example of her familys wishes for her; Louis, who is the churchs will for her life; and Nelson, who is societys choice.

The only element that bothered me about Austins book was the mystery surrounding Silas McClure. In the beginning it fit everything very well, but the average reader will figure out who he is by the middle of the story, and Violets inability to see what is obvious until the end becomes rather annoying. But, all in all, I very much enjoyed A Proper Pursuit, and would recommend it to any reader who wants a light and romantic story. -- Kate R. Miller, Christian Book Previews.com

▼▲
Christy award-winning historical novelist Austin delivers her strongest offering yet, a coming-of-age story set in late-19th-century Illinois. The great strength of this novel comes from the first-person narrators charming voice: 20-year-old Violet Hayes is distressed to learn that her father is remarryingand that her mother, whom Violet believed lay recovering from a mysterious illness in a sanitarium somewhere, had in fact simply abandoned her family and filed for divorce. To escape a stepmother-to-be she cant stand, Violet heads to Chicago to stay with her grandmother and great-aunts. Although shes recently graduated from a genteel school for young ladies, its in Chicago that Violets real education begins. One great-aunt tries to persuade her to join the suffrage movement, while another introduces Violet to elite society and urges her to catch a wealthy husband. Her grandmother, who takes her cues from Jane Addams, introduces Violet to the world of revivalist Christianity and inner-city good works, prompting Violet to re-examine her own faith. Two questions drive the plot: will Violet find her mother, and will she encounter true love? Readers will enjoy accompanying Violet as she discovers the answers, her calling and her adult self. (Sept.) Copyright 2007 Reed Business Information.

▼▲
I'm the author/artist and I want to review A Proper Pursuit.
Back
Back