We are OPEN and SHIPPING - click here for shipping estimates
PRE-SUMMER CYBER SALE EXTENDED thru 6/1 ~ Over 2,500 items up to 90% off
A Promise Kept, Kings Meadow Series #1
By: Robin Lee Hatcher 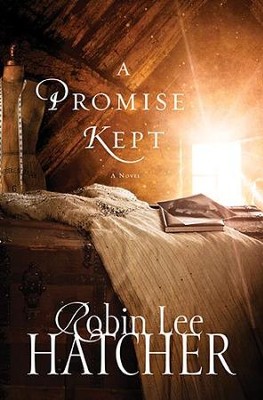 ▼▲
Allison did everything she could do to rescue her marriage, but her husband left anyway. Their marriage is over. She retreats to the mountain home she inherited from her great-aunt Emma, a woman she thought she'd known well. But the trunks she discovers in the attic hold keepsakes, photographs, and journals that reveal secrets-and the stories of a kindred spirit.

As Allison learns more about Aunt Emma's life, she also learns more about her true self-and what it means to surrender completely to a sovereign God. Heart healing and moving forward with her life-making new friends, making new plans-Allison never dreamed of the many unexpected ways God can keep His promises.

God was going to save her marriage, Allison was sure of it. But neither her husband nor her marriage had been saved.

What had become of His promise?

Tony Kavanagh had been Allison’s dream-come-true. They were in love within days, engaged within weeks, married and pregnant within a year. Her cup bubbled over with joy . . . but years later, that joy had been extinguished by unexpected trials.

The day Allison issued her husband an ultimatum, she thought it might save him. She never expected he would actually leave. She was certain God had promised to heal; it was clear that she'd misunderstood.

Now, living in the quiet mountain cabin she inherited from her single, self-reliant Great Aunt Emma, Allison must come to terms with her grief and figure out how to adapt to small town life. But when she finds a wedding dress and a collection of journals in Emma’s attic, a portrait of her aunt emerges that takes Allison completely by surprise: a portrait of a heartbroken woman surprisingly like herself.

As Allison reads the incredible story of Emma’s life in the 1920s and 1930s, she is forced to ask a difficult question: Does she really surrender every piece of her life to the Lord?

Drawing from her own heart-wrenching story of redemption, A Promise Kept is Robin Lee Hatcher’s emotionally charged thanksgiving to a God who answers prayers—in His own time and His own ways.

"Hatcher’s latest is an uplifting and heartwarming story about the power of faith to set people free from the pain of their pasts. Recommended where &shy;Tracie Peterson’s books (All Things Hidden; The Miner’s Lady) are popular." —Library Journal, STARRED Review

▼▲
I'm the author/artist and I want to review A Promise Kept, Kings Meadow Series #1.
Back
×
Back
×