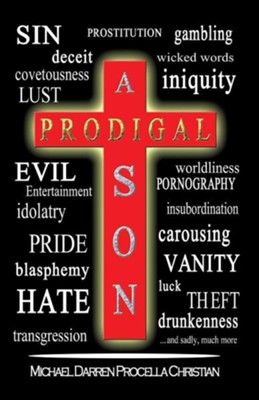 ▼▲
A Prodigal Son is the story of a young man who was in the Father s presence throughout childhood, left the Father during young adulthood, and returned to the Father at the age of twenty-one in a most unusual setting for salvation. Throughout this book, Michael explains his former life of sin, including but not limited to deceit, theft, carousing, drunkenness, gambling, fornication, pornography, and homosexual prostitution. In addition to recounting his former life, Michael also explains theological doctrines concerning God and man. Michael Darren Procella Christian is a native to Orange, Texas. He earned an Associate of Science degree from Lamar State College-Orange and a Bachelor of General Studies degree from the University of New Orleans. Michael has also studied at New Orleans Baptist Theological Seminary for a Master of Divinity degree.

▼▲
I'm the author/artist and I want to review A Prodigal Son.
Back