Skip to main content
A Prisoner of Versailles - eBook
By: Golden Parsons
Stock No: WW4556EB 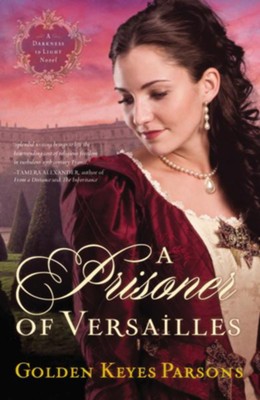 A Prisoner of Versailles - eBook

▼▲
Having fled their homeland of France because of the persecution by Louis XIV, the Clavell family seeks refuge in Switzerland. However, the king is not about to let the recently widowed Madeleine, his childhood sweetheart, escape that easily. He sends musketeers to kidnap her and her oldest son, Philippe, holding them captive in his opulent palace. King Louis is suspicious that Philippe could be his son, and he's enraged by the growing affection of one of his courtiers for Madeleine. Will Madeleine escape the king with her life or lose everything that she's fought so hard to keep?

Lavish and Luxurious Versailles
King Louis XIV's burgeoning palace is the place to be--and be seen. And the last place on earth Madeleine wants to be.
She's trapped there as a pampered prisoner. If she stays in France, she'll be forced to deny her faith. By escaping the King's long arm, she may find freedom--but it will cost her everything she holds dear.
Madeleine will need courage, hope, and total faith in God to outmaneuver the Sun King and reach her true destiny--and love--in another country.

▼▲
A Prisoner of Versailles by Golden Keyes Parsons is the second book of a series called Darkness to Light. The protagonist, Madeleine Clavell, is on the run with her Huguenot family in seventeenth-century Switzerland after her estate has been burned and her husband taken prisoner by King Louis XIV, the staunchly Catholic monarch of France. But she is captured and taken to Versailles with her elder son, Philippe, soon after her husband Francois dies from consumption. Madeleine had had a brief affair with Louis as a teenager years earlier, and Louis suspected Phillipe to be his illegitimate son. Even if there are no blood ties, Louis is determined to keep mother and son at Versailles, as he is still in love with Madeleine and wants her as his courtesan.

[Spoiler Alert]A courtier, Pierre Bovee, helps Madeleine cope with her imprisonment at Versailles, although he is considered a traitor by the court and is soon whisked away to Bastille prison. With help of a good friend, he manages to escape and, in turn, secures Madeleines and Philippes escape from Versailles. They return to the cottage in Switzerland, and after a short marriage ceremony to each other, they begin their journey to Holland and, hopefully, to the New World. They know that King Louis troops are looking for them, and they must stay the course, hoping that the troops believe that they are heading for Spain.

This is a well-written, fast-paced historical romance that keeps the reader turning pages. It is particularly suitable for Christian women readers, as references to God are plentiful throughout the novel. Madeleine questions God during her stay with the king, and is challenged in her faith as she tries to play the game at the court, getting along with the array of people who surround King Louis. Scripture is quoted by Madeleines Uncle Jean at the Swiss cottage, giving hope and guidance when he wants to know what happened to her and to Philippe. Giving over to the Lord and what He will do with ones life is the overall theme of this wonderful story. A Prisoner of Versailles is recommended for all readers, but especially women.  Anita Tiemeyer, www.ChristianBookPreviews.com

▼▲
I'm the author/artist and I want to review A Prisoner of Versailles - eBook.
Back
Back