Skip to main content
A Principle Within
By: Kenneth Q. James
Stock No: WW962200 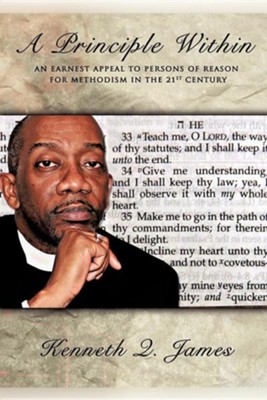 ▼▲
A native of New York City, the Reverend Dr. Kenneth Q. James is the second son of three children born to the late Earl M. and the late Joan E. James. He is a graduate of John F. Kennedy High School, Bronx, New York, Clinton Junior College, Rock Hill, South Carolina (1978), Livingstone College, Salisbury, North Carolina, (1980 with honors), and Hood Theological Seminary in Salisbury, North Carolina, from which he earned the M.Div. and D. Min. degrees in 1984 and 2006, respectively.Dr. James' Christian nurture was in the Mother A.M.E. Zion Church in New York City. He answered the call to the Christian ministry in 1975, was ordained to the ministry by the late Bishop Herbert Bell Shaw, and ordained an Elder in the A.M.E. Zion Church by the late Bishop Ruben L. Speaks in 1984. He was pastor of Pierce Chapel A.M.E. Zion Church in Clarkton, North Carolina, Blackwell Chapel A.M.E. Zion Church, Jamestown, New York, Bailey Avenue A.M.E. Zion Church, Buffalo, New York (which he organized in 1987), Duryee Memorial A.M.E. Zion Church, Schenectady, New York, and currently, Memorial A.M.E. Zion Church, Rochester, New York.Dr. James is Western New York Annual Conference Director of Evangelism, and Secretary of the Western New York Annual Conference. Bishop George E. Battle, Jr. appointed him to serve as a board member representing the Northeastern Episcopal District on the Bureau of Evangelism of the A.M.E. Zion Church. He is a member of the Alpha Phi Alpha Fraternity, Inc., and Adjunct Assistant Professor of Preaching at Northeastern Seminary at Roberts Wesleyan College, Rochester, New York. He is the author of The First Yes: Rediscovering the Integrity of the Call to Preach, and Strength for the Journey.Dr. James has one son, Frank, and two granddaughters, Ajaya and Ajanae.

▼▲
I'm the author/artist and I want to review A Principle Within.
Back