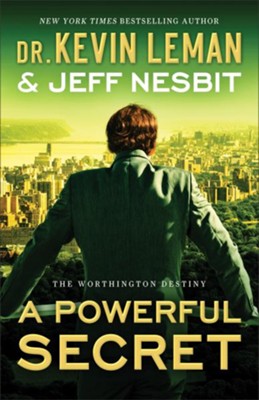 A Powerful Secret #2, in The Worthington Destiny series, by Dr. Kevin Leman and Jeff Nesbit

What was Will thinking, turning his back on a run for the New York Senate after months of hard work?  Sean Worthington, Will’s brother and campaign manager – well, former campaign manager – is not at all pleased.  Maybe now is the time to set his own path and enter the political arena himself.  But would that be a wise move?

▼▲
Sean Worthington is shocked when he hears his older brother Will announce that he will not run for New York's Senate seat. In fact, he's angry. All of his efforts as Will's campaign manager are now for nothing--and Sean is left to handle questions from the press while Will walks away without a backward glance. Throughout his life, Sean has felt like an outsider in his own family. And not being told about his brother's plans is just one more piece of evidence that he's right.

Tired of being the odd one out, Sean is determined to forge his own path. Little does he know that it's not easy to escape your family--especially when a powerful secret from the past threatens to explode everything Sean ever believed.

Bestselling author, psychologist, and birth order expert Dr. Kevin Leman and novelist and journalist Jeff Nesbit are back with another intrigue-filled look inside the influential Worthington family.

▼▲
Internationally known psychologist, radio and television personality, speaker, and educator Dr. Kevin Leman has taught and entertained audiences worldwide. The New York Times bestselling and award-winning author of over 50 books, including The Birth Order Book, Born to Win, Have a New Family by Friday, and Have a New Kid by Friday has made thousands of house calls through Fox & Friends, The View, Today, Bill Bennett's Morning in America, CBS's The Early Show, The 700 Club, and CNN.

Jeff Nesbit is a former communications director to the vice president at the White House, served as the director of public affairs for two prominent federal science agencies, and has been a national journalist with Knight Ridder Newspapers. He is the author of twenty novels. The co-creator of the Emmy Award-winning Science of the Olympic Winter Games and the Science of NFL Football video series with NBC Sports, Jeff is executive director for Climate Nexus and writes At the Edge, a weekly science column for U.S. News & World Report.

▼▲
I'm the author/artist and I want to review A Powerful Secret #2.
Back
Back