A Plague of Unicorns
By: Jane Yolen 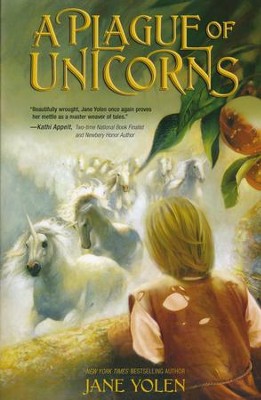 A Plague of Unicorns

▼▲
Young James, an earl's son, is a bit bothersome and always asking the oddest questions. When the last of his tutors quits, his mother sends him away to be educated at Cranford Abbey. But Cranford Abbey has its own problems---the Abbey is falling apart. Abbot Aelian believes he can save the abbey with his secret weapon: a recipe for golden apple cider passed down through his family for generations. One obstacle stands in his way---unicorns! Unicorns with very sharp horns that happen to feast specifically on the golden apples. Recommended for ages 8 to 12 years.

Young James, an earl’s son, is a bit bothersome and always asking the oddest questions. Desperate, his mother sends him off to be educated at Cranford Abbey, hoping the strict regimen will do him a world of good. But Cranford Abbey has been falling into disrepair. The newly appointed Abbot Aelian takes it upon himself to save the abbey with the use of his secret weapon: a recipe for golden apple cider passed down in his family for many generations. Abbot Aelian has everything he needs—almost. One obstacle stands in his way: unicorns that happen to feast specifically on the golden apples. Abbot Aelian and his monks try to form a battalion to fight off the beasts; next they import heroes to fight for them. But the heroes run off, monks are injured, and a herd of ravenous unicorns continue munching. James, however, knows a small hero who possesses the skill to tame the beasts. It is up to James to convince the reluctant abbot, and not only save Cranford Abbey but hopefully find a way to return home.

Jane has been called the Hans Christian Andersen of America and the Aesop of the twentieth century. She sets the highest standard for the industry, not only in the meaningful body of work she has created, but also in her support of fellow authors and artists. Her books range from the bestselling How Do Dinosaurs series to the Caldecott winning Owl Moon to popular novels such as The Devil’s Arithmetic, Snow in Summer, and The Young Merlin Trilogy, to award-winning books of poetry such as Grumbles from the Forest, and A Mirror to Nature. In all, she has written over 335 books (she’s lost count), won numerous awards (one even set her good coat on fire), and has been given six honorary doctorates in literature. For more information, please visit www.janeyolen.com.

▼▲
I'm the author/artist and I want to review A Plague of Unicorns.
Back
×
Back
×