Skip to main content
A Place of Peace: A Novel - eBook
By: Amy Clipston
Stock No: WW3114EB 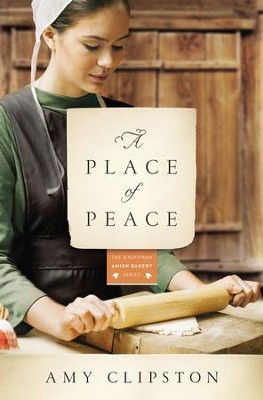 A Place of Peace: A Novel - eBook

▼▲
Miriam Lapp, who left the Amish community in Pennsylvania three years ago, is heartbroken when her sister calls to reveal that her mother has died suddenly. Traveling home to Pennsylvania, she is forced to face the heartache from her past, including her rift from her family and the break up of her engagement with Timothy Kauffman. Her past emotional wounds are reopened when her family rejects her once again and she finds out that Timothy is in a relationship with someone else. Miriam discovers that the rumors that broke them up three years ago were all lies. However, when Timothy proposes to his girlfriend and Miriam's father disowns her, Miriam returns to Indiana with her heart in shambles. When Miriam's father has a stroke, Miriam returns to Pennsylvania, and her world begins to fall apart, leaving her to question her place in the Amish community and her faith in God.

Take a trip to Bird-in-Hand, Pennsylvania, where you’ll meet the women of the Kauffman Amish Bakery in Lancaster County. As each woman’s story unfolds, you will share in her heartaches, trials, joys, dreams &hellip; and secrets. You’ll discover how the simplicity of the Amish lifestyle can clash with the "English" way of life—and the decisions and consequences that follow. Most importantly, you will be encouraged by the hope and faith of these women, and the importance they place on their families. Miriam Lapp, who left the Amish community of Bird-in-Hand three years ago, is heartbroken when her sister calls to reveal that her mother has died suddenly. Traveling home to Pennsylvania, she is forced to face the heartache from her past, including her rift from her family and the breakup of her engagement with Timothy Kauffman. Her past emotional wounds are reopened when her family rejects her once again and she finds out that Timothy is in a relationship with someone else. Miriam discovers that the rumors that broke them up three years ago were all lies. However, when Timothy proposes to his girlfriend and Miriam’s father disowns her, Miriam returns to Indiana with her heart in shambles. When Miriam’s father has a stroke, Miriam returns to Pennsylvania, where her world continues to fall apart, leaving her to question her place in the Amish community and her faith in God.

▼▲
A Place of Peace, the third novel in the Kauffman Amish Bakery Series by Amy Clipston, tells the emotional story of Miriam Lapp, a former Amish woman seeking forgiveness from her family. Miriam, who has adapted to the modern world of Englishers, is shocked by the news that her mother has died. Devastated, Miriam returns to her former community only to face rejections and false accusations from both her family and the man she once loved.

The author tells the story by using multiple viewpoints that allow readers a peek into the mindset of an Amish community. Readers will be caught up in character conflict as they watch sparks fly between Miriam and her former love interest. It is this relationship in particular that reveals the most artfully-woven plot points. Readers are sure to be properly frustrated by the author's page-turning ability to keep her main characters apart.

The central portion of the plot revolves around Miriam and her desire to be reunited with her Amish roots. Though she is continually shunned by her family, Miriam slowly wins her way back into the hearts of her friends and even manages to catch the eye of her old sweetheart, Timothy Kauffman. But the opening of old wounds and the unraveling of a deceitful web leaves Miriam's future hanging in the balance. Ultimately, Miriam must decide if she will return to her Amish upbringing or permanently abandon it in favor of a comfortable English life.

Miriam Lapp is a sweet, confused human who desires to be accepted and loved by those people she cares for most. While her long-suffering nature can make her seem almost too perfect at times, her loyalty to family and concern for friends is admirable. It is also notable that minor characters who are initially portrayed as antagonists are, in the end, only well-meaning members of what is essentially a somewhat dysfunctional, Amish family. Overall, the theme of Clipston's latest tale solidly upholds biblical truths, such as those found in Colossians 3:13: Bearing with one another, and forgiving each other, whoever has a complaint against anyone; just as the Lord forgave you, so also should you.

Reading A Place of Peace was an experience that can be compared to eating a whoopie pie. The first few bites were tasty, but by the time the entire dessert was consumed, I was left wondering if Clipston's creation was just a little too sweet. However, unlike the empty calories of a whoopie pie, this Amish treat does offer up some nutritious value. Generous portions of Christian love and forgiveness, along with liberal dashes of loyalty and friendship, are found throughout the book. Top it all off with a dollop of romance, and you have a recipe for a story that any Beverly Lewis or Wanda Brunstetter fan will be sure to enjoy.  Kari Travis, www.ChristianBookPreviews.com

▼▲
Clipston wraps up the Kauffman Amish Bakery series with a tale of Amish star-crossed lovers Timothy Kauffman and Miriam Lapp. Miriam has left her Amish community, but returns when she receives news of her mother's death. There she must face her estrangement from her family because of a painful incident in the past and the presence of Timothy, to whom she was once engaged and whom she still loves, and who is now involved with someone else. A complicated web of relationships, tangled by lies, reticence, and indirection, is slowly resolved as the story unfolds. Clipston's narrative drags repetitively around the lovers--how many times can Timothy raise his eyebrows in surprise and eat Miriam's crumbly peach pie?--and misses chances for conveying greater emotion in central family relationships. Yes, there are recipes for baked goods, a tasty addition. A mitteling addition to the Amish romance shelf. (Dec.) Copyright 2010 Reed Business Information.

▼▲
“This is the third book in the Kauffman Amish Bakery series. Readers who haven’t read the previous two books may be confused as characters’ histories are not really explained. The love between Timothy and Miriam is apparent from the first time they see each other again. The author adheres to the old Plain traditions, both in relationships and the way of life for the Amish community. This is an entertaining story of Amish life, loss, love and family.” -- RT Book Reviews, 4-star review

Q: Will this ebook work on a Nook? I see the Sony ereader but will this work on the nook too?

Yes, all of our ebooks work with the Nook.

Q: what are ebooks? Is jus for a computer

E-books can be read on your computer or on other designated devices. You can find more information in our e-books link at the top of the page.

▼▲
I'm the author/artist and I want to review A Place of Peace: A Novel - eBook.
Back
Back