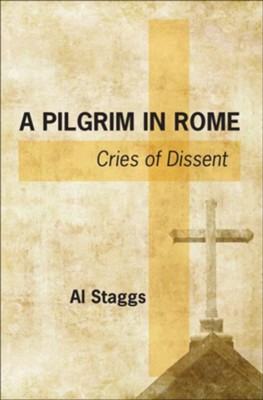 A Pilgrim in Rome

▼▲
""Al Staggs knows about words and puts them to fresh and suggestive use. He knows about brutality that shows its ugly face in too many places. And he knows about phoniness that supports evil by its default. With his words he conducts guerilla warfare, leaving us unsettled, seeing more clearly than we might wish, inviting us to decide anew. No easy slumbers here "" --Walter Brueggeman ""Al Staggs writes his poetry with the passion of a prophet. Like Amos of old, he recognizes that divine worship is nothing but human justice being offered to God and that human justice is nothing but divine worship being acted out. His words call religious spokesperson and political leaders who lace their rhetoric with religious phrases alike to acknowledge both their idolatry and their hypocrisy. Read him and weep for what your country has become and for what Christianity is no more."" --John Shelby Spong Al Staggs holds a B.A. from Hardin-Simmons University, an M.R.E. from Southwest Baptist Theological Seminary, a Th.M. from Harvard Divinity School, and a Doctor of Ministry degree from Austin Presbyterian Theological Seminary. In the spring of 1983 he was honored as a Charles E. Merrill Fellow at Harvard with major emphasis in applied theology under the direction of Harvey Cox. After serving as a pastor for 24 years, Al became a full-time performing artist. His repertoire of seven programs includes characterizations of Dietrich Bonhoeffer, Clarence Jordan, and Oscar Romero. He has been writing and publishing poetry related to the themes of peace and justice throughout his careers as pastor and performer.

▼▲
I'm the author/artist and I want to review A Pilgrim in Rome.
Back