Skip to main content
A Philosophy of the Christian Religion
Edited By: Edward John Carnell
Stock No: WW6356216 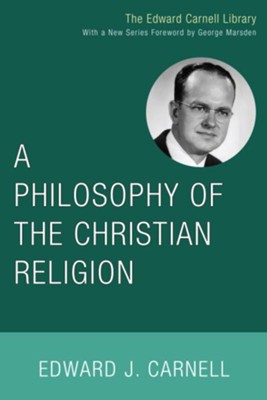 A Philosophy of the Christian Religion

▼▲
Introducing the Edward Carnell Library (Nine Titles Listed Inside) A Philosophy of the Christian Religion is not a defense of the Christian faith in the conventional sense. The gamut of contending values and the systems of thought preoccupying the contemporary mind are analyzed here with admirable comprehension and lucidity. These competing philosophies are severally evaluated by the whole perspective of the Christian system and demonstrated as partial, here-and-now values, incapable of satisfying the demands of the whole man. ""Christianity is a coherent religion. It never asks the heart to trust values which the reason is obliged to discard as contradictory. No value commitment is completely satisfying until the complete man is satisfied."" --from the preface "" Carnell's] argument in favor of the highest and best in Christian thought and life runs cogently and convincingly. Patiently, step by step, Carnell follows the circuitous and often devious paths of modern man as he tries to secure himself against God, who like Thompson's Hound of Heaven relentlessly pursues him in love--and for his own ultimate good."" --William A. Mueller, in The Review and Expositor ""Edward John Carnell was--in my estimation--the brightest and the best of the neo-evangelical leaders. He was a courageous thinker who was not afraid to think new thoughts in the service of biblical orthodoxy. The Carnell Library is a gift to today's evangelical movement."" --Richard J. Mouw President, Fuller Seminary "" Carnell's] fertile mind and ready pen blazed fresh theological trails as he sought to defend and proclaim the Christian faith as a world and life view."" --Dr. David Allan Hubbard Former President, Fuller Theological Seminary Edward John Carnell (1919-1967) was an ordained Baptist minister who served for three years as Associate Professor of Philosophy of Religion at Gordon Divinity School. He taught apologetics at Fuller Theological Seminary from 1948 to 1967 and served there as the second president from 1954 to 1959.

▼▲
I'm the author/artist and I want to review A Philosophy of the Christian Religion.
Back