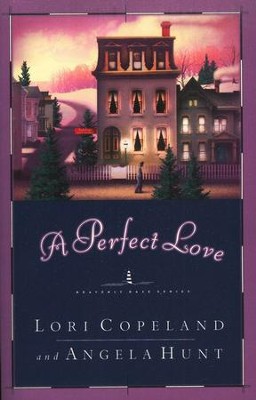 ▼▲
A secret arrival and a clandestine submission. Battles over babies and pink ruffles. The new year brings challenges aplenty for the angels on the Island of Heavenly Daze.

Floyd and Cleta Lansdown adore their daughter, Barbara. They'd be perfectly happy if Barbara and her husband, Russell, lived with them forever, but Russell's been dropping hints about finding a place of their own and Barbara's talking about starting a family. What, Cleta wonders, would a twenty-three-year-old girl possibly know about raising a child?

Buddy Franklin knows he's the town misfit. He has always marched to the beat of a different drummer, but how can he help being who he is? Yet his lonely days are about to change: he has sent for a companion--a warm, cuddly creature to occupy his thoughts and listen to the poetry that rises out of him like bubbles from an Alka Seltzer . . .

As the new year begins on Heavenly Daze, will Buddy find lasting happiness with his new friend? Will Barbara have a baby? Will Birdie and Salt solidify their plans for marriage? The month of January holds no rest for the angels who guard the homes of Heavenly Daze!

Despite the blustery winter chill, love is in the air in Heavenly Daze. Buddy Franklin is searching for someone to change his lonely life, Dana and Mike Klackenbush are trying to reestablish the friendship that led them to marriage three years before, Barbara and Russell Higgs are contemplating babies, and Cleta Lansdown is determined to keep Barbara, her married daughter, close to home. The angels who inhabit the island are surprised and overwhelmed when Buddy gets a pet, Dana toys with harmless flirtation, Barbara discovers she can't have a baby, and Cleta gives her son-in-law a pink, ruffled bedroom ensemble for his birthday! As always, the folks of Heavenly Daze triumph, learn, laugh, and love - and readers will do much of the same!

Lori Copeland is a bestselling author whose books includde Now and Always, Simple Gifts, Unwrapping Christmas, and Monday Morning Faith, which was a finalist for the 2007 Christy Awards. Lori was inducted into the Springfield Writers Hall of Fame in 2000 and lives in the beautiful Ozarks with her husband and family.

▼▲
I'm the author/artist and I want to review A Perfect Love, Heavenly Daze Series #4.
Back
Back