BIG SUMMER BLOWOUT: 3 Days Only! Save up to 90% thru Wednesday. Shop now >
A Perfect Father's Day
By: Eve Bunting 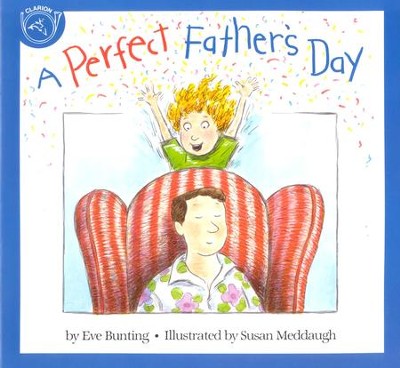 ▼▲
On Father's Day Susie decides to take her dad out. They go to all her favorite places. She thinks the places are her dad's favorites. They eat at a fast food restaurant, play at the playground, buy balloons, and feed the ducks. It was the perfect Father's Day.

▼▲
"I'm taking you out for Father's Day," Susie tells Dad. "First we'll go for lunch." "Good," Dad says. "May I drive?" "Certainly," Susie says. She chooses the restaurant, and pretty soon Dad can see that she's filled this special day with treats--treats for both of them! When they get back home, Mom's final surprise (that isn't really a surprise at all) is a perfect ending for the perfect day.

Eve Bunting has written over two hundred books for children, including the Caldecott Medal-winning Smoky Night, illustrated by David Diaz, The Wall, Fly Away Home, and Train to Somewhere. She lives in Southern California.

Susan Meddaugh was born and raised in Montclair, New Jersey. She graduated from Wheaton College, where she studied French literature and fine arts. After working briefly with an advertising agency in New York, she moved to Boston and worked at a publishing company for ten years, first as a designer, then art editor, and finally as art director. While there, she did the illustrations for Good Stones (Houghton Mifflin) by Anne Epstein, and then decided to strike out on her own as a freelance illustrator and creator of children's books. Since that time, Susan has written and illustrated many popular books for children, including Martha Speaks, which was chosen as a New York Times Best Illustrated Book for 1992. In 1998 she was awarded the New England Book Award, given by the New England Booksellers Association to recognize a body of work. Her work also was acknowledged with a New York Times Best Illustrated Award. She lives in Sherborn, Massachusetts.

▼▲
"It's Father's Day, and four-year-old Susie has planned a perfect outing with all the things she knows her dad will like the best. . . . Bunting's simple, witty text sketches a warm father-daughter relationship and affectionately glances at the four-year-old mind at work. Meddaugh's bright watercolors and pencil illustrations add to the humor as they show the two enjoying the day but with clearly differing levels of energy and points of view." Booklist, ALA

"Clearly the perfect Father's Day requires the perfect father, and Susie's parent quite literally takes the cake. Meddaugh's balloon-colored cartoons are perfectly tuned to the spirit of the day. With more spontaneity than most made-to-order picture books, this is an engaging family portrait and a winning tribute to 'Dad.'" School Library Journal

▼▲
I'm the author/artist and I want to review A Perfect Father's Day.
Back
×
Back
×