We are OPEN and SHIPPING - click here for shipping estimates
PRE-SUMMER CYBER SALE EXTENDED thru 6/1 ~ Over 2,500 items up to 90% off
A Novena of Holy Communions
By: Fr. Lawrence G. Lovasik S.D.V. 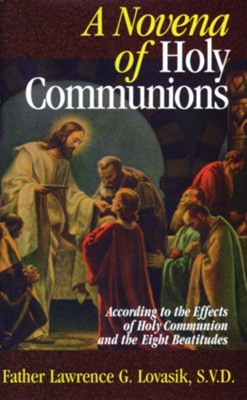 A Novena of Holy Communions

▼▲
A famous devotional booklet of nine consecutive Communion exercises. Each exercise consists of a novena prayer, an intimate talk with Our Lord, and a brief self-examination. Rich in doctrine; ideal to make over and over throughout life--to grow in holiness and grace.

▼▲
Father Lawrence G. Lovasik, S.V.D., was born in 1913 at Tarentum, Pennsylvania. Born to Slovak parents, he was the oldest of eight children, and became a student of the Sacred Heart Mission Seminary at the age of twelve. In 1938, he was ordained a priest and subsequently began missionary work in the coal and steel regions of the United States. He was drawn to writing as a result of his desire to represent Christ among the people he served as a missionary. Father Lovasik is the author of A Novena of Holy Communions, What Catholics Believe, and Clean Love in Courtship.

▼▲
I'm the author/artist and I want to review A Novena of Holy Communions.
Back
×