Skip to main content
SPRING CYBER SALE: The sale you've been waiting for! Up to 85% off through 5/25>
A Night to Remember - eBook
By: Walter Lord
Stock No: WW43967EB 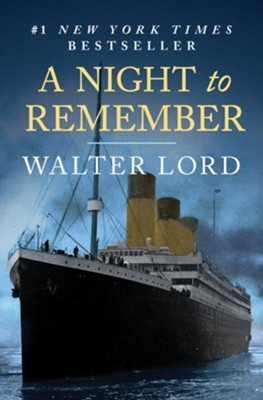 A Night to Remember - eBook

▼▲
#1 New York Times Bestseller: The definitive account of the sinking of the Titanic, based on interviews with survivors.

At first, no one but the lookout recognized the sound. Passengers described it as the impact of a heavy wave, a scraping noise, or the tearing of a long calico strip. In fact, it was the sound of the world’s most famous ocean liner striking an iceberg, and it served as the death knell for 1,500 souls.
In the next two hours and forty minutes, the maiden voyage of the Titanic became one of history’s worst maritime accidents. As the ship’s deck slipped closer to the icy waterline, women pleaded with their husbands to join them on lifeboats. Men changed into their evening clothes to meet death with dignity. And in steerage, hundreds fought bitterly against certain death. At 2:15 a.m. the ship’s band played "Autumn." Five minutes later, the Titanic was gone.
Based on interviews with sixty-three survivors, Lord’s moment-by-moment account is among the finest books written about one of the twentieth century’s bleakest nights.

▼▲
Walter Lord (1917–2002) was an acclaimed and bestselling author of literary nonfiction best known for his gripping and meticulously researched accounts of watershed historical events. Born in Baltimore, Lord went to work for the Office of Strategic Services during World War II. After the war’s end, Lord joined a New York advertising firm, and began writing nonfiction in his spare time. His first book was The Fremantle Diary (1954), a volume of Civil War diaries that became a surprising success. But it was Lord’s next book, A Night to Remember (1955), that made him famous. The bestseller caused a new flurry of interest in the Titanic and inspired the 1958 film of the same name. Lord went on to use the book’s interview-heavy format as a template for most of his following works, which included detailed reconstructions of the Pearl Harbor attack in Day of Infamy (1957), the battle of Midway in Incredible Victory (1967), and the integration of the University of Mississippi in The Past That Would Not Die (1965). In all, he published a dozen books.

▼▲
"[A Night to Remember] is a book that I will never forget." —Edward S. Kamuda, Titanic Historical Society President
"A stunning book, incomparably the best on its subject and one of the most exciting books of this or any year." —The New York Times
"Absolutely gripping and un-put-downable." —David McCullough, author of John Adams

▼▲
I'm the author/artist and I want to review A Night to Remember - eBook.
Back
Back