Skip to main content
A Night of Great Joy
By: Mary Engelbreit
Stock No: WW743542 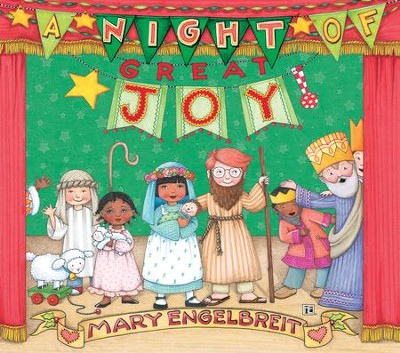 A Night of Great Joy

Usher in Christmas with this sweet interpretation of Jesus' birth! Capturing the wonder and awe of that holy night, Mary Englebreit tells the delightful story of the nativity through the performance of a children's pageant. Her simple text and adorable illustrations will charm your kids as you cuddle up on the couch on a crisp winter evening! 32 pages, hardcover from Zonderkidz.

Mary Engelbreit presents A Night of Great Joy, a delightful picture book that celebrates the joyful season of Christmas. This book tells the story of the nativity through the performance of a children’s Christmas pageant. With adorable illustrations and simple storytelling, Engelbreit paints a wonderful picture of the night that Jesus was born.

A Night of Great Joy recalls that fateful night with wonder and awe. From the arrival of Mary and Joseph in Bethlehem to the gathering of many before the baby Jesus, this holiday treasure leads children through the tale of the birth of Jesus, guiding them with the star of Bethlehem.

Mary Engelbreit grew up studying the illustrations in the vintage storybooks of her mother’s own childhood, and she developed a unique style that harkens back to those simpler times. Mary’s distinctive images have made her a celebrity to millions, who eagerly snap up gift items, calendars, books, fabrics, and more. Mary’s dearest wish has always been to illustrate for children. Her New York Times bestselling The Night Before Christmas is already part of the holiday tradition for families across the country.

▼▲
On the title-page spread, a diverse group of children and their families enter a building hung with a large banner proclaiming “Christmas Pageant.” The rest of the book presents the traditional play as it unfolds on stage. The narration offers a simply worded version of the biblical story, following Mary and Joseph through Bethlehem to the stable where the child is born. Angels appear to the shepherds, who make their way to the stable, followed by the wise men. All kneel to worship the infant. Though there are no surprises in the text, the illustrations include a few unexpected and charming additions. Mary rides around Bethlehem in a little red wagon; the baby looks a lot like Raggedy Andy; and two shepherds have a tug-of- war struggle over a toy lamb. With the spotlight on the rounded forms of rosy-cheeked, costumed kids drawn in Engelbreit’s signature style, this colorful picture book will please her adult fans while holding the interest of many children. --- Carolyn Phelan -- Booklist

A classic Sunday School Christmas pageant is acted out by a multiethnic cast of children in this Christmas offering in Englebreit's signature illustration style.The pageant begins with a little black girl as an angel reading the passage from Luke that announces that Jesus has been born. The text describes the traditional Nativity story as though a narrator were reading it, with the child performers coming on stage in costume as the story progresses. Mary is an Asian girl, and Joseph is a white boy with red hair and a fake brown beard. One of the wise men is black, and a chorus of angels includes several children of color. The children are dressed in charming costumes with appropriate details, and there are funny little incidents tucked into the illustrations, such as two shepherd girls playing tug of war with a toy sheep and a tiny cow asleep on stage at the conclusion. The girl playing the part of Mary uses a rag doll for baby Jesus, and the final page shows Mary hugging her doll tenderly under the shining star. Though almost every Christian Sunday school puts on a Christmas pageant, there are few picture books that cover this annual holiday event, especially titles accessible to preschoolers. Children preparing to be in a pageant will enjoy this, as will Engelbreit's many adult fans. (Picture book. 3-6) -- Kirkus

An elementary-school Christmas pageant plays out with warm humor in Engelbreit’s (The Night Before Christmas) holiday offering. The author’s cherubic characters perform the Nativity story using rudimentary props that will trigger smiles: a robed Joseph with a comically fake beard pulls Mary in a red wagon outfitted with a donkey head, a rocking horse and a rubber duck keep watch in the stable, the newborn Jesus is a rag doll, and stuffed animals fill in for sheep. The narrative is a straightforward, pared-down version of the biblical tale, without dialogue, which leaves the pictures to showcase the children’s personalities (two shepherds fight over a toy lamb, a prima donna’s antics irk her fellow angels, and a costumed cow falls asleep as the Wise Men arrive). The Nativity tale is one of great things born out of humble circumstances, a theme that dovetails perfectly with the homespun staging of the children’s production. Starred review on 10/1/16. -- Publishers Weekly

▼▲
I'm the author/artist and I want to review A Night of Great Joy.
Back
Back