Skip to main content
A New Kind of Christianity
By: Brian D. McLaren
Stock No: WW853999 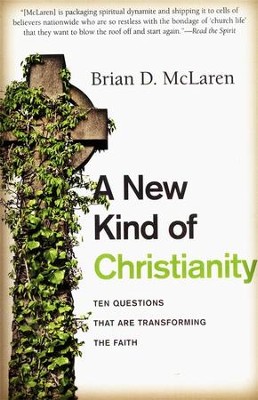 A New Kind of Christianity

▼▲
"McLaren has been hailed widely as one of the most significant religious leaders of our time. In articulating his longings and disquiet with the status quo, he strikes a chord with many,"---Christian Century. Startling reassessments of the Bible, authority, God, Jesus, the gospel, church, sex, pluralism, and the future. 319 pages, softcover.

We are in the midst of a paradigm shift in the church. Not since the Reformation five centuries ago have so many Christians come together to ask whether the church is in sync with their deepest beliefs and commitments. These believers range from evangelicals to mainline Protestants to Catholics, and the person who best represents them is author and pastor Brian McLaren.

In this much anticipated book, McLaren examines ten questions facing today's church—questions about how to articulate the faith itself, the nature of its authority, who God is, whether we have to understand Jesus through only an ancient Greco-Roman lens, what exactly the good news is that the gospel proclaims, how we understand the church and all its varieties, why we are so preoccupied with sex, how we should think of the future and people from other faiths, and the most intimidating question of all: what do we do next? Here you will find a provocative and enticing introduction to the Christian faith of tomorrow.

Brian D. McLaren, hailed as one of America's 25 most influential evangelicals by Time magazine, is a speaker, social justice activist, pastor, and the author of A New Kind of Christianity, A Generous Orthodoxy, A New Kind of Christian, and The Secret Message of Jesus. McLaren has appeared on Nightline and Larry King Live, and his work has been covered in The Washington Post, the New York Times, Christianity Today, and many other publications. McLaren and his wife, Grace, live in Florida and have four adult children.

▼▲
I'm the author/artist and I want to review A New Kind of Christianity.
Back
Back