A New Day: A Guided Journal
By: Sandi Patty 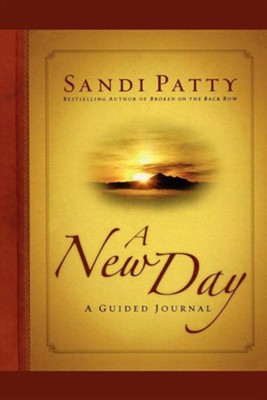 A New Day: A Guided Journal

▼▲
A Guided Journal for the Journey of Your Heart

Come, walk with Sandi on this amazing 100-day journey of grace...into a bright, new day.

One hundred new days await you as you join Sandi Patty on this journey of grace. You will be inspired each day with a Scripture passage and thought from Sandi that have been selected to encourage and inspire you to write -- little sparks to ignite your spirit to record your innermost thoughts and prayers. Let God's Word and Sandi's gentle prompting get you started.

▼▲
Sandi Patty is the most awarded female vocalist in contemporary Christian music history with thirty-nine Dove Awards, five Grammy Awards, and four Billboard Music Awards. Her twenty-four albums have sold more than eleven million units including three platinum and five gold recordings. In 2004 Sandi was inducted into the GMA Hall of Fame and in 2005 she penned her autobiography Broken on the Back Row. She has regularly appeared on network TV including The Tonight Show, Live! with Regis and Kathie Lee, CNN, and Entertainment Tonight.

▼▲
I'm the author/artist and I want to review A New Day: A Guided Journal.
Back
×