Skip to main content
A Nation Transformed by Information
Stock No: WW128141 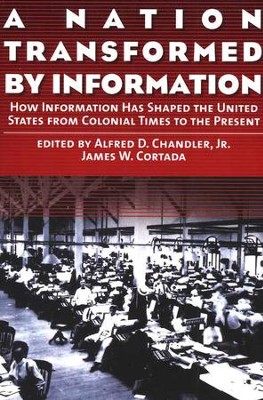 A Nation Transformed by Information

▼▲
Almost everyone in North America, Europe, East Asia and beyond has been inundated with the idea that we're living in an "Information Age" due to the internet. Yet the steps that led up to this seeming blitz of information has been a long journey of incremental stages that's been well documented in American culture and history. From the first newsletters to the telegraph to the personal computer, the transformation of a country through information is a unique lens through which to view America. Chapters are contributed through respected professors and business people. 380 pages, softcover with index.

▼▲
This book makes the startling case that North Americans were getting on the "information highway" as early as the 1700's, and have been using it as a critical building block of their social, economic, and political world ever since.
By the time of the founding of the United States, there was a postal system and roads for the distribution of mail copyright laws to protect intellectual property, and newspapers, books, and broadsides to bring information to a populace that was building a nation on the basis of an informed
electorate. In the 19th century, Americans developed the telegraph, telephone, and motion pictures, inventions that further expanded the reach of information. In the 20th century they added television, computers, and the Internet, ultimately connecting themselves to a whole world of information.
From the beginning North Americans were willing to invest in the infrastructure to make such connectivity possible. This book explores what the deployment of these technologies says about American society. The editors assembled a group of contributors who are experts in their particular fields and
worked with them to create a book that is fully integrated and cross-referenced.

▼▲
I'm the author/artist and I want to review A Nation Transformed by Information.
Back
Back