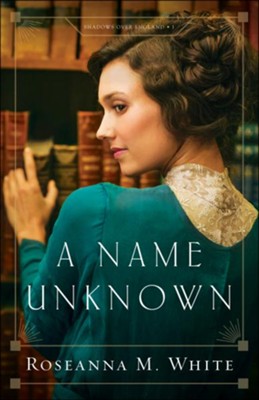 Peter Holstein is of German descent and writes books under a pen name. In the months leading up to the start of World War I, he considers changing his name permanently to prove his loyalty to England, but must first prove his land holdings and citizenship. Rosemary Gresham survives by blending into upper-class society and stealing high-value items. For her next heist, she pretends she is a historian and offers to help Peter trace his family history. He hires her to find his family documents. As she gets to know him, she begins to see she is going down the wrong path and must decide if she should finally change her way of life.

▼▲
Edwardian Romance and History Gains a Twist of Suspense

Rosemary Gresham has no family beyond the band of former urchins that helped her survive as a girl in the mean streets of London. Grown now, they concentrate on stealing high-value items and have learned how to blend into upper-class society. But when Rosemary must determine whether a certain wealthy gentleman is loyal to Britain or to Germany, she is in for the challenge of a lifetime. How does one steal a family's history, their very name?

Peter Holstein, given his family's German blood, writes his popular series of adventure novels under a pen name. With European politics boiling and his own neighbors suspicious of him, Peter debates whether it might be best to change his name for good. When Rosemary shows up at his door pretending to be a historian and offering to help him trace his family history, his question might be answered.

But as the two work together and Rosemary sees his gracious reaction to his neighbors' scornful attacks, she wonders if her assignment is going down the wrong path. Is it too late to help him prove that he's more than his name?

▼▲
Roseanna M. White pens her novels beneath her Betsy Ross flag, with her Jane Austen action figure watching over her. When not writing fiction, she's homeschooling her two children, editing and designing, and pretending her house will clean itself. Roseanna's fiction ranges from biblical fiction to American-set romances to her new British series. She lives with her family in West Virginia. Learn more at www.roseannamwhite.com.

▼▲
I'm the author/artist and I want to review A Name Unknown #1.
Back
Back