We are OPEN and SHIPPING - click here for shipping estimates
PRE-SUMMER CYBER SALE EXTENDED thru 6/1 ~ Over 2,500 items up to 90% off
A Moveable Feast: The Restored Edition
By: Ernest Hemingway 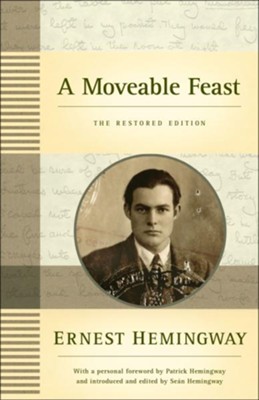 A Moveable Feast: The Restored Edition

▼▲
Published for the first time as Ernest Hemingway intended, one of the great writer’s most beloved and enduring works: his classic memoir of Paris in the 1920s.

Published  posthumously  in  1964,A  Moveable  Feast remains  one  of  Ernest  Hemingway’s  most  beloved works.   Since   Hemingway’s   personal   papers   were released  in  1979,  scholars  have  examined  and  debated  the changes made to the text before publication. Now, this spe- cial restored edition presents the original manuscript as the author intended it to be published.

Featuring a personal Foreword by Patrick Hemingway, Ernest’s sole surviving son, and an Introduction by the editor and grandson of the author, Sean Hemingway, this new edi- tion also includes a number of unfinished, never-before-pub- lished Paris sketches revealing experiences that Hemingway had with his son, Jack, and his first wife Hadley. Also included are irreverent portraits of other literary luminaries, such as F. Scott Fitzgerald and Ford Maddox Ford, and insightful recollections of Hemingway’s own early experiments with his craft.

Sure to excite critics and readers alike, the restored edition of A Moveable Feast brilliantly evokes the exuberant mood of Paris after World War I and the unbridled creativity and unquenchable enthusiasm that Hemingway himself epitomized.

▼▲
Ernest Hemingway was born in Oak Park, Illinois, in 1899. He served in the Red Cross during World War I as an ambulance driver and was severely wounded in Italy. He moved to Paris in 1921, devoted himself to writing fic- tion, and soon became part of the expatriate community, along with Gertrude Stein, F. Scott Fitzgerald, Ezra Pound, and Ford Maddox Ford. He revolution- ized American writing with his short, declarative sentences and terse prose. He was awarded the Nobel Prize for Literature in 1953. Known for his larger- than-life personality and his passions for bullfighting, fishing, and big-game hunting, he died in Ketchum, Idaho, on July 2, 1961.

▼▲
"The first thing to say about the 'restored' edition so ably and attractively produced by Patrick and SeÁn Hemingway is that it does live up to its billing . . . well worth having."--Christopher Hitchens, The Atlantic

▼▲
I'm the author/artist and I want to review A Moveable Feast: The Restored Edition.
Back
×