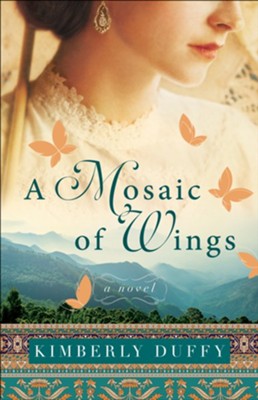 A Mosaic of Wings

▼▲
Nora Shipley joins an entomology expedition to India to carry on her father's legacy. While frustrated at being confined to camp to illustrate butterflies, her two bright lights are Owen Epps, for whom she's developed feelings, and Sita, a young woman seeking freedom. Will Nora be able to choose between what she's always wanted and unexpected possibilities? 368 pages, softcover from Bethany.

▼▲
It's 1885, and all Nora Shipley wants, now that she's graduating from Cornell University as valedictorian of the entomology program, is to follow in her late father's footsteps by getting her master's degree and taking over the scientific journal he started. The only way to uphold her father's legacy is to win a scholarship, so she joins a research expedition in Kodaikanal, India, to prove herself in the field.

India isn't what she expects, though, and neither is the rival classmate who accompanies her, Owen Epps. As her preconceptions of India--and of Owen--fall away, she finds both far more captivating than she expected. Forced by the expedition leader to stay at camp and illustrate exotic butterflies the men of the team find without her, Nora befriends Sita, a young Indian girl who has been dedicated to a goddess against her will.

In this spellbinding new land, Nora is soon faced with impossible choices--between saving Sita and saving her career, and between what she's always thought she wanted and the man she's come to love.

▼▲
Kimberly Duffy is a Long Island native currently living in Southwest Ohio, via six months in India. When she's not homeschooling her four kids, she writes historical fiction that takes her readers back in time and across oceans. She loves trips that require a passport, recipe books, and practicing kissing scenes with her husband of twenty years. He doesn't mind. You can find Kimberly at www.kimberlyduffy.com.

▼▲
I'm the author/artist and I want to review A Mosaic of Wings.
Back
×
Back
×