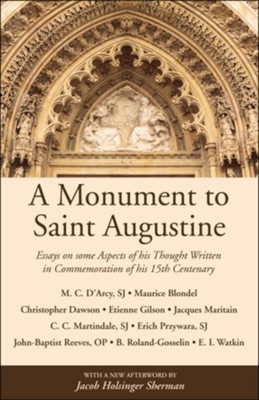 A Monument to Saint Augustine

▼▲
""A Monument to Saint Augustine, now happily reprinted by Wipf and Stock, gathers many diverse strands of the early twentieth century Catholic thought within its pages: the creative transformation of neo-scholasticism through a kind of ressourcement, the Catholic literary intellectual renaissance in Europe and Britain, the focus upon the renewal of Christian humanism in the face of modernity's proliferating dangers, and the Augustinian turn as a resource for the theology of crisis. Were it to do nothing else, this volume would be of extraordinary historical importance insofar as it makes clear how central the legacy of St. Augustine was to the interwar renaissance in Catholic thought and culture, not only to Burns, Dawson, and the British Catholics but also to the great figures of the Continent: Blondel, Gilson, Maritain, and Przywara. But the volume does much more. The contributions themselves are of real, substantive, and lasting value. The essays contained in this volume are not in theology per se--though theology, especially the doctrine of creation and theological anthropology, lies ever just beneath the surface. Rather, they treat Augustine from the perspective of philosophy, history, religious studies, and the humanities more generally."" -- From the New Introduction by Jacob Sherman ""A remarkable tribute."" -- The New Statesman ""No more appropriate monument could have been devised."" -- Observer ""Admirable . . . attractive . . . brilliant."" -- Spectator

▼▲
I'm the author/artist and I want to review A Monument to Saint Augustine.
Back