Skip to main content
A Moment with the Messiah
By: Stephen L. Christo
Stock No: WW570347 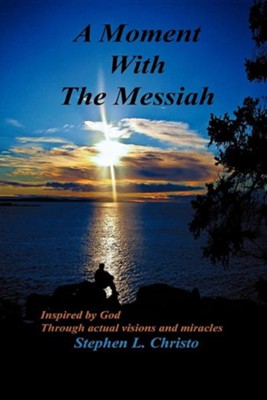 A Moment with the Messiah

▼▲
God inspired this book to a man who went from worshipping false gods, bowing before idols, offering sacrifices, and often times, he found himself in the presence of individuals possessed by demonic spirits. Then one day, his eyes were truly opened when the one true God revealed to him a vision of the end times. He saw glimpses of individuals receiving the mark of the beast, and images of people being led into eternal darkness, while those who were sealed by the blood of Christ were destined to be in the presence of God for all eternity. His life changed one day when the Messiah Himself in another vision, said to him, "Come to me, my child, and I will take care of you." This is where his search for God really began. Today, he serves the one true God and His son Jesus Christ the Messiah.Stephen L. Christo was born in 1967 in the small town of Riversdale, in the island of Trinidad and Tobago. He moved to Pennsylvania in 1993, and in the fall of 1997, accepted Jesus Christ as his Lord and Savior. He was an assistant pastor for over five years in a church named Grace Bible Chapel in Hatboro, PA. Through a number of experiences, which God has brought him through, including visions and miracle healings, the Lord has laid upon his heart the desire to write this book, in honor of what God has done in his life and for what He wants to do in the lives of others. This book, "A Moment with the Messiah" is his first book.

▼▲
I'm the author/artist and I want to review A Moment with the Messiah.
Back