We are OPEN and SHIPPING - click here for shipping estimates
A Moment of Weakness, Forever Faithful Series #2
By: Karen Kingsbury 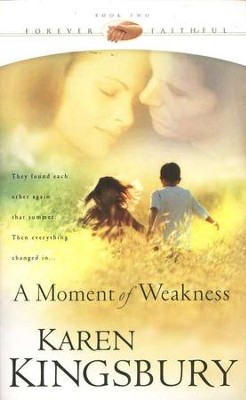 ▼▲
In the second book of the Forever Faithful series, a series of misunderstanding and misfortune has always been a part of the relationship between Jade Connor and Tanner Eastman. As children, they were inseparable until a scandal tore them apart. As young adults, they again seek comfort in each other, allowing a love to grow until Tanner's mother spreads lies that again drive them apart, but this time to different parts of the country for more than a decade.

Now, however, Jade is fighting for the custody of her child against an unfaithful husband who is using her religious beliefs against her. She turns to the person who still knows her best - Tanner - to help her win the legal battle. In a series of mistakes and lies, can truth resurface from Jade and Tanner's past to heal their relationship and teach of faith and freedom? Karen Kingsbury, softcover, 411 pages.

Had they found each other again after all these years, only to lose everything that matters most?

As children, Jade Conner and Tanner Eastman were best friends—until scandal drove them apart. Then, one golden summer, they find each other again.  Through endless days they share their hearts and souls and dreams of forever.  Then, in a moment of weakness, they make a decision that will tear them apart for nearly a decade.

In their own separate corners of the country, Jade and Tanner have become fighters for religious freedom. Now Jade’s unfaithful husband is determined to destroy her in a custody battle that will rock the nation and shake people’s understanding of faith and freedom. Could Jade lose her only child because of her faith? Only one man can help her in her darkest hour. And only one old woman knows the secret about that summer and the truth that can set them all free.

KAREN KINGSBURY is a USA Today and NewYork Times best-selling author, with more than 15 million books in print. Dubbed the Queen of Christian Fiction by Time magazine, Karen has written more than forty Life-Changing Fiction titles.  Her emotionally gripping novels include the popular Baxter Family Drama, which encompasses the Redemption, Firstborn, and Sunrise series, as well as stand-alone novels such as Like Dandelion Dust, When Joy Came to Stay, and This Side of Heaven. Karen and her husband, Don, live in the Pacific Northwest and are parents to six children, including three adopted from Haiti. Visit her website at www.KarenKingsbury.com.

▼▲
I'm the author/artist and I want to review A Moment of Weakness, Forever Faithful Series #2.
Back
×
Back
×