Skip to main content
A Modern Ninety-Five
By: Nancy A. Almodovar
Stock No: WW356780 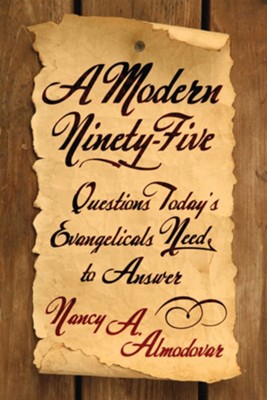 ▼▲
Description: In 1517 an Augustinian monk by the name of Martin Luther nailed ninety-five statements to the door at Castle Church in Wittenberg, Germany. This was not a means of open debate but a desire to discuss scholarly objections to church practices of the time. Five centuries later, many of the same errors and heresies have crept back into the evangelical church. A modern ninety-five theses, couched in new terms for a new generation, require scholarly debate once again. Through modern-day apostles and prophets, and through the elitists within the evangelical church, the doctrine of buying God's grace and favor has been propagated through appeals for seed offerings and ""atonement-day"" donations in order to garner God's blessings. Pragmatic approaches to preaching the gospel through such movements as the seeker-driven models have moved the focus of the message of Christ and the worship of God from being God-centered to human-centered. Sound historical doctrines, such as the Trinity, have been relegated to the sidelines in favor of unity and ecumenicalism with Oneness preachers. In the words of Martin Luther, ""Out of love for the truth and the desire to bring it to light,"" the following propositions need to be discussed in their entirety by church leaders, pastors, and laypeople alike. Endorsements: The format of A Modern Ninety-Five is an eye-catcher, given the connection to what Brother Martin Luther did for the Western churches. Nancy hails from the charismatic tradition and the value of her testimony and experience--including the anguish and hubris--brings an important factor to the table. I most strongly believe the time has come when Christ's Church must speak with increased visibility to these matters and confront the issues. In short, we need something akin to this to confront the modern dangers of Montanism, enthusiasm, extra-biblical revelations, and ""Word of Faith"" movements. --D. Philip Veitch, former Navy Chaplain About the Contributor(s): Nancy A. Almodovar received her BA in theology from Trinity Theological Seminary. After her conversion at age nineteen, Nancy's father, Peter F. Shore Sr., began to aid her in biblical studies through the works of Reformed and evangelical ministers such as D. Martyn Lloyd-Jones, J. C. Ryle, Martin Luther, John Calvin, John Owen, and Jonathan Edwards. Through personal experience within the Pentecostal/Charismatic movement, Word of Faith teachings and Apostolic/Prophetic promoters, Nancy brings firsthand knowledge of the dangers of such teachings. Nancy and her husband, Rev. Roberto, cofounded Silent Cry Ministries, which heralds the doctrine of grace in the New York City area as well as in Ghana (West Africa). She is also the author of The Journey: From Faith to Doubt to Faith Again and The Courage Factor.

▼▲
I'm the author/artist and I want to review A Modern Ninety-Five.
Back