Skip to main content
A Mile in My Flip-Flops
By: Melody Carlson
Stock No: WW073146 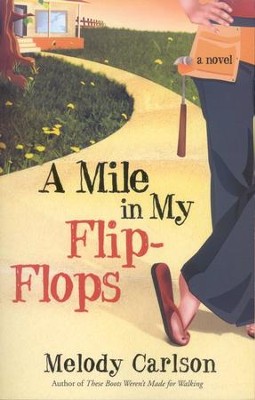 A Mile in My Flip-Flops

▼▲
With a freshly broken heart, Gretchen Hanover swaps her wedding plans for home improvement shows---she's going to flip a house! But when the place turns out to be in worse condition than she realized, her retired contractor father needs help and calls in carpenter Noah Campbell. A whimsical look at building relationships and renovating hearts! 336 pages, softcover from Waterbrook.

▼▲
Thirty-something Gretchen Hanover is stuck. Seeking solace from a broken heart, she traded her wedding plans for home improvement shows and ice cream—but she knows she can’t live on Ben and Jerry’s forever. She also knows that her enthusiastic Lab puppy has outgrown her tiny apartment.

The perfect patch for Gretchen’s dilapidated plans? She’ll become a first-time house-flipper. As ideas go, it’s daring and genius. She’ll take out a short-term loan, buy a fixer-upper, renovate it, resell it, and use the profit for an adorable house of her own. What could be easier?

But Gretchen’s plans to flip quickly flop when the house turns out to be in worse shape than she expected. She is relying on her retired contractor-father, but he wants to draw in his carpenter friend Noah Campbell. And although Noah is handy with tools, Gretchen isn’t so sure about the baggage he brings with him. Will she be able to loosen her grip on the tools when it seems Noah may be her only help?

A whimsical look at color swatches, mismatched curtain rods, and the building of relationships, A Mile in My Flip-Flops reminds us that it takes faith to renovate the heart, as well as the home.

▼▲
Melody Carlson is the award-winning author of more than 200 books for adults, children, and teens, including Finding Alice, Crystal Lies, On This Day, These Boots Weren’t Made for Walking, and the Notes from a Spinning Planet series. Melody has two grown sons and lives in central Oregon with her husband and her chocolate lab retriever. A full-time writer, she enjoys skiing, gardening, camping, and biking in the beautiful Cascade Mountains.

▼▲
Gretchen Hanover has been jiltednot quite at the altar, but close enough. Her cramped studio apartment becomes the catalyst for this lonely 30-something to change her life in Carlson's latest inspirational chick lit novel. Gretchen decides to become a house flipper, just like the folks on her favorite reality show. Unfortunately, Carlson (Finding Alice) piles such high stakes onto Gretchen's decision to buy a disastrous houseDad is on the verge of a heart attack, yet Gretchen wants him to do the contracting; the loan's low interest is only for six weeks; and her father's condo, his only asset, is collateralthat it hinders the author's attempt at lightheartedness. Though the house-flipping theme is unusual and engaging, Gretchen's willingness to gamble her father's health and financial security makes her seem selfish, and her negative attitude toward Noah Campbell (the handsome, kind, divorced contractor who predictably comes to her rescue) highlights Gretchen's judgmental side. Of course, God is the ultimate fix-it man who saves the day, but it's not enough to rescue this makeover romance. (June 17)Copyright 2008 Reed Business Information.

▼▲
I'm the author/artist and I want to review A Mile in My Flip-Flops.
Back
Back