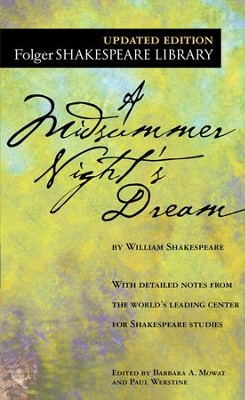 ▼▲
In A Midsummer Night’s Dream, Shakespeare stages the workings of love. Theseus and Hippolyta, about to marry, are figures from mythology. In the woods outside Theseus’ Athens, two young men and two young women sort themselves out into couples—but not before they form first one love triangle, and then another.

Also in the woods, the king and queen of fairyland, Oberon and Titania, battle over custody of an orphan boy; Oberon uses magic to make Titania fall in love with a weaver named Bottom, whose head is temporarily transformed into that of a donkey by a hobgoblin or “puck,” Robin Goodfellow. Finally, Bottom and his companions ineptly stage the tragedy of “Pyramus and Thisbe.”

The authoritative edition of A Midsummer Night's Dream from The Folger Shakespeare Library, the trusted and widely used Shakespeare series for students and general readers, includes:

The Folger Shakespeare Library in Washington, DC, is home to the world’s largest collection of Shakespeare’s printed works, and a magnet for Shakespeare scholars from around the globe. In addition to exhibitions open to the public throughout the year, the Folger offers a full calendar of performances and programs. For more information, visit Folger.edu.

▼▲
William Shakespeare was born in April 1564 in the town of Stratford-upon-Avon, on England’s Avon River. When he was eighteen, he married Anne Hathaway. The couple had three children—an older daughter Susanna and twins, Judith and Hamnet. Hamnet, Shakespeare’s only son, died in childhood. The bulk of Shakespeare’s working life was spent in the theater world of London, where he established himself professionally by the early 1590s. He enjoyed success not only as a playwright and poet, but also as an actor and shareholder in an acting company. Although some think that sometime between 1610 and 1613 Shakespeare retired from the theater and returned home to Stratford, where he died in 1616, others believe that he may have continued to work in London until close to his death. Barbara A. Mowat is Director of Research emerita at the Folger Shakespeare Library, Consulting Editor of Shakespeare Quarterly, and author of The Dramaturgy of Shakespeare’s Romances and of essays on Shakespeare’s plays and their editing. Paul Werstine is Professor of English at the Graduate School and at King’s University College at Western University. He is a general editor of the New Variorum Shakespeare and author of Early Modern Playhouse Manuscripts and the Editing of Shakespeare and of many papers and articles on the printing and editing of Shakespeare’s plays.

▼▲
I'm the author/artist and I want to review A Midsummer Night's Dream - eBook.
Back
Back