Skip to main content
A Matter of Trust, Montana Rescue Series #3
By: Susan May Warren
Stock No: WW727457 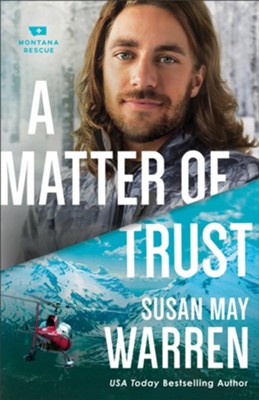 Ex-champion snowboarder Gage Watson got sued for negligence after the death of one of his fans. He is now a ski patrol and serves on the PEAK Rescue team in the mountains of Montana. The ex-prosecuting attorney kept a secret in the courtroom. Later she needed his help after her reckless brother went missing in the Glacier National Park. She wanted to help in the search effort, but he has no reason to trust her.

▼▲
Champion backcountry snowboarder Gage Watson has left the limelight behind after the death of one of his fans. After being sued for negligence and stripped of his sponsorships, he's remade his life as a ski patrol in Montana's rugged mountains, as well as serving on the PEAK Rescue team. But he can't seem to find his footing--or forget the woman he loved, who betrayed him.

Senator and former attorney Ella Blair spends much of her time in the limelight as the second-youngest senator in the country. But she has a secret--one that cost Gage his career. More than anything, she wants to atone for her betrayal of him in the courtroom and find a way to help him put his career back on track.

When Ella's brother goes missing on one of Glacier National Park's most dangerous peaks, Gage and his team are called in for the rescue. But Gage isn't so sure he wants to help the woman who destroyed his life. More, when she insists on joining the search, he'll have to keep her safe while finding her reckless brother, a recipe for disaster when a snowstorm hits the mountain.

But old sparks relight as they search for the missing snowboarder--and suddenly, they are faced with emotions neither can deny. But when Ella's secret is revealed, can they learn to trust each other--even when disaster happens again?

▼▲
Susan May Warren is the USA Today bestselling author of nearly 90 novels with more than 1.5 million books sold, including the Global Search and Rescue and the Montana Rescue series, as well as Sunrise and Sunburst. Winner of a RITA Award and multiple Christy and Carol Awards, as well as the HOLT Medallion and numerous Readers' Choice Awards, Susan makes her home in Minnesota. Find her online at www.susanmaywarren.com, on Facebook @SusanMayWarrenFiction, and on Twitter @SusanMayWarren.

▼▲
I'm the author/artist and I want to review A Matter of Trust, Montana Rescue Series #3.
Back
Back