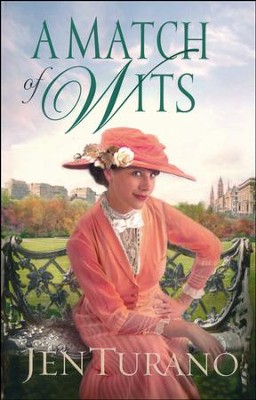 A Match of Wits

▼▲
Two years ago, Zayne Beckett's departure from New York City to meet up with his almost-fiance caused Agatha Watson no small amount of grief. So he is the last person she wanted to stumble upon in her travels as a reporter with the New York Tribune. Looking worse for the wear, he clearly needs to be taken in hand and taken back East to his family. Even though she's over him, Agatha can't help feeling sorry for him and realizes she'll have to be the one to get the stubborn man back home.

Zayne has no desire to be taken anywhere. Content to sit and mope over his recent bad fortune and the desertion of his not-quite-fiance, he's prepared to drag his heels all the way back to New York. That is, until he and Agatha find themselves slipping back into the strangely enjoyable bickering and bantering of their old friendship.

▼▲
After his departure from New York two years ago to meet up with his almost-fiancée, Zayne Beckett is the last person Agatha Watson wanted to stumble upon in her travels as a reporter with the New York Tribune. Quite pathetically bedraggled, he clearly needs to be taken in hand and sent back East to his family. Although she no longer has feelings for him, Agatha realizes, by hook or by crook, she'll have to be the one to get the obstinate man home.

Zayne has no desire to be taken anywhere and is prepared to drag his heels all the way home... until he finds himself slipping back into the familiar banter of his former friendship with Agatha. Once they arrive in New York, Zayne realizes Agatha's determined nose for news has earned her a few enemies, and he hopes to repay her help with some help of his own. When she rebuffs all his attempts to prove himself a knight in shining armor, the lengths to which they'll go to win this battle of wills lead to some memorable antics.

Everyone else may think them a match, but nothing could be further from the truth--until Agatha finds herself in real trouble. Have these two stubborn, too-smart-for-their-own-good people been meant for each other all along?

▼▲
Jen Turano, author of three books and one novella, is a graduate of the University of Akron with a degree in clothing and textiles. She is a member of ACFW and lives in a suburb of Denver, Colorado. Learn more at www.jenturano.com.

▼▲
I'm the author/artist and I want to review A Match of Wits.
Back
Back