A Marriage of the Heart - eBook
By: Kelly Long 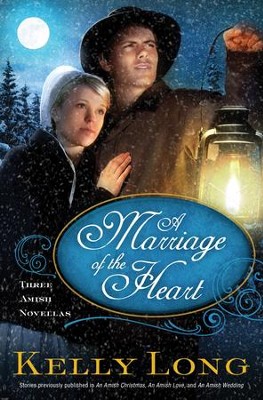 A Marriage of the Heart - eBook

Three Stories That Share the Adventures of First Love and Second Chances.

A Perfect Secret—Rose Bender’s betrothed, Luke Lantz, is safe and dependable, maybe a little too much so. Or so she thinks until she sees him in the woods one night and discovers a secret he’s been keeping. Now his secret haunts her. She wasn’t sure about marrying a man she knew too well. But should she marry a man she doesn’t understand at all?

Christmas Cradles—When Anna Stolis takes over for her aunt, the local midwife, Christmas night heats up with multiple deliveries, three strangers’ quilts, and unexpected help from the handsome and brooding Asa Lapp.

A Marriage of the Heart—Since her mother’s death, Abigail Kauffman has lived alone with her father. She longs to escape the emptiness of the farmhouse that has never felt like home. Joseph Lambert is a newcomer in their close-knit community. Only after suddenly marrying do they begin to understand the tender truths of life-long love.

▼▲
I'm the author/artist and I want to review A Marriage of the Heart - eBook.
Back
×
Back
×