Skip to main content
A Man for Temperance - eBook
By: Gilbert Morris
Stock No: WW15531EB 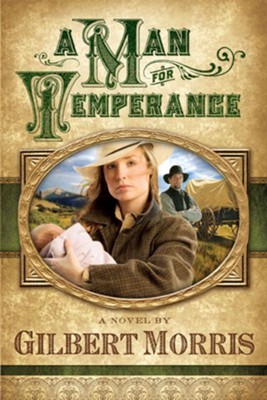 A Man for Temperance - eBook

▼▲
In 1850, Temperance Peabody, age 32, is a plain yet beautiful woman who has yet to know the thrill of romantic love. Raised in the Oregon territory where her parents established a strict religious colony, she was never allowed to have a suitor but now longs to have a family of her own.

After her parents die and a cholera epidemic wracks the colony, Temperance feels called by God to take the surviving orphaned children back East to their extended families. But the only man available to accompany her on the dangerous journey is Thaddeus Brennan, a hard-edged drifter with good reasons of his own to get out of town.

Despite the mismatch of Temperance’s purity with Thad’s hot temper, heavy drinking, and distaste for kids, the intensities of their trek help the two find common ground, perhaps enough on which to build a lasting relationship. But life and love are unpredictable. And when another man and woman join the journey, and a shock awaits two of the orphans, this hearty story of faith and new desires duly follows.

▼▲
Gilbert Morris is among today's most popular Christian writers, his books having sold nearly six million copies worldwide. A former pastor and English professor, he specializes in historical fiction and won a 2001 Christy Award for the Civil War drama Edge of Honor. Morris lives with his wife in Gulf Shores, Alabama.

▼▲
Temperance Peabody is a thirty-two-year-old spinster with a farm to run, and her only hired hand is a cantankerous drunk. With a cholera epidemic in the area, Temperance cares for some of the affected families. When several people die, leaving their children orphans, Temperance steps in to care for the kids. God soon makes it clear that He wants her to take the children back east to their relatives. But Temperance knows she cant make the rugged trip alone, and the only man she can hornswoggle into helping her is her hired handand even then, she has to agree to something that challenges her Christian ethics.
Thaddeus Brennan cant figure out how he got wrangled into guiding a prudish Bible-preaching spinster and six children back east. Thousands of people are traveling west on the Oregon Trail but nobody is going eastexcept them. Thad has his hands full dodging Indians, running from the law, and managing to keep safe his motley crew. When Quaid, an old friend, joins their ranks, Thad is grateful to have another man around. But when Quaid turns his gaze on Temperance, Thad cant understand why it bothers him. He has no interest in wooing the plain spinster, so why is he so irritated when Temperance seems to welcome Quaids attentions?
Temperance has never known the attraction of a man and isnt sure how to react to Quaids obvious interest. Her parents shooed away any suitors that came calling, so she never spent much time around men. Will she find romance on the long trip from Oregon to Louisiana? Will she be able to give up the children she has come to love?
A MAN FOR TEMPERANCE is an interesting read. Thaddeus, the hero, is a man who can hardly be called heroic in the beginning. Hes cranky, often drunk, rude, and smelly, but he can be bold and a fierce defender when necessary. Temperance seems a bit naïve for a woman in her thirties, but shes honest, caring, and devoted to her faith. Gilbert Morris brings the backward trip on the Oregon Trail to life with interesting details that he has deftly woven in to the storyline. The story moves at a steady pace, much like the oxen pulling the covered wagon, and rapid point of view changes can be confusing at times, but readers will overlook that for an enjoyable tale of two unlikely rescuers helping a half dozen children. The kids and a lady of the night named Belle make interesting secondary characters and liven up the story. The take home value of A MAN FOR TEMPERANCE is two-fold. First, nobody is beyond the reach of Gods redemption, and second, God can work things out for good even if it seems theres no possible way. For a trip back to when days moved at a slower pace and life was about surviving, try A MAN FOR TEMPERANCE.
Vickie McDonough

▼▲
I'm the author/artist and I want to review A Man for Temperance - eBook.
Back
Back