We are OPEN and SHIPPING - click here for shipping estimates
PRE-SUMMER CYBER SALE EXTENDED thru 6/1 ~ Over 2,500 items up to 90% off
A Love That Multiplies - eBook
By: Michelle Duggar, Jim Bob Duggar 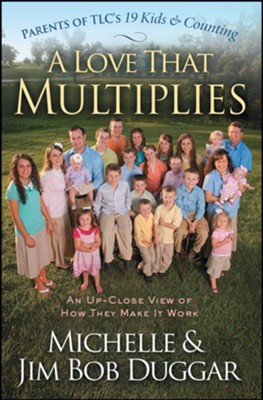 A Love That Multiplies - eBook

▼▲
Now in paperback—Michelle and Jim Bob Duggar share the joys and challenges of parenting with faith.

Anyone who sees America’s best-known mega family on television is filled with curiosity. People want to know….Why do they have so many children? What do they believe? What does the family do for fun? How do they get their children to obey so well? How can they afford to live? Now, Michelle and Jim Bob show how parents can succeed whether they’re rearing a single child or several.

In this second book from the Duggars, they explain the principles that equip their family to face life’s realities—including their most recent hardship with the three-month premature birth of their newest child, Josie. Josie’s birth tested everything the family believed in and demonstrates how they worked together, relying on their faith. They also discuss helping their older children navigate decisions about courtship and marriage and how to prepare to be productive adults. As the Duggars share their hearts and faith, readers will find answers to their many questions about this inspirational family.

▼▲
Michelle Duggar has been married for more than twenty years to her husband, Jim Bob, and they are blessed with nineteen children. The Duggars have the #1 program on TLC/Discovery Health/TLC documentaries and have appeared on national television shows, such as the Today show, Good Morning America, The View, Inside Edition, Jimmy Kimmel Live, and others. Jim Bob and Michelle Duggar married in 1984. Some time after the birth of their first child, they prayed that God would give them a love for children like his love for children and that he would bless them with as many children as he saw fit in his timing. Soon after, Michelle became pregnant with twins! The Duggars currently have ten boys and nine girls, and all their names begin with “J”—Joshua, Jana and John-David (twins), Jill, Jessa, Jinger, Joseph, Josiah, Joy-Anna, Jedidiah and Jeremiah (twins), Jason, James, Justin, Jackson, Johannah, Jennifer, Jordyn-Grace, and Josie.

The Duggars are the #1 program on TLC/ Discovery Health / TLC documentaries and have appeared multiple times on national TV shows, such as The Today Show, Good Morning America, The View, Inside Edition, Jimmy Kimmel Live, Fox News Network, CNN, MSNBC, and others. Foreign television appearances include Italian Public Television, KBS (Korean Broadcasting System), and Discovery Home & Health (UK & Australia). They have been featured in magazine and newspaper articles in China, India, New Zealand, Australia, France, and Germany. As a family project, the Duggars built a seven-thousand-square-foot home. Both Jim Bob and Michelle are licensed real estate agents and conduct the Jim Sammon’s Financial Freedom Seminar in their community. They purpose to live completely debt-free—postponing  purchases until they have the cash. Jim Bob served in the Arkansas House of Representatives from 1999 to 2003 and was a candidate for the U.S. Senate in 2002.

▼▲
I'm the author/artist and I want to review A Love That Multiplies - eBook.
Back
×
Back
×