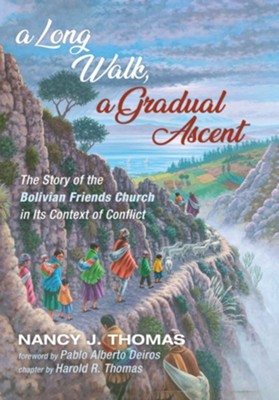 A Long Walk, a Gradual Ascent

A Long Walk, a Gradual Ascent tells the one-hundred-year story of the development of the Friends Church (INELA) among the Aymara peoples of the Bolivian Andes. It stretches from the beginnings of the INELA on the shores of Lake Titicaca around 1915 until the present time (2017), along with the story of the Oregon Friends Mission that accompanied the church for seventy-two years. Today the INELA spreads over fifteen districts with some two hundred congregations. The church is still predominately Aymara.

The book considers the influence of history and culture on each phase of the church’s development, exploring the complexity of planting a “peace church” such as the Quakers in a setting of so much conflict. The book also explores the missiological significance of the changing relationship between church and mission, and wrestles with denominational emphases and how they impacted the expression of an indigenous Aymara church.

▼▲
I'm the author/artist and I want to review A Long Walk, a Gradual Ascent.
Back
×