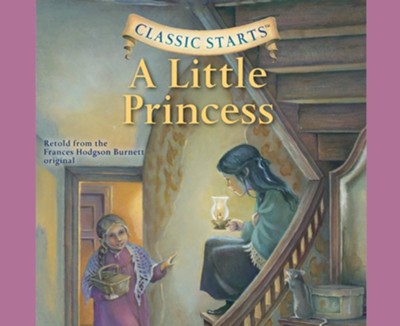 Poor Sara Crewe. Once upon a time her beloved father pampered and adored her. But ever since he died, leaving her alone and penniless, she's been caught in the cruel clutches of Miss Minchin, the headmistress at the Select Seminary for Young Ladies, where Sara once studied. But no matter how terrible things get, Sara always has her imagination and goodness of heart to carry her through. This timeless tale of a poor orphan has won children's hearts for a century--and continues to be a favorite.

▼▲
Frances Hodgson Burnett wrote for children and adults, publishing both plays and novels. She was born in Manchester, England, on November 24, 1849. Her father, who owned a furniture store, died when she was only four years old. Her mother struggled to keep the family business running while trying to raise five children. Finally, because of the failing Manchester economy, the family sold the store and immigrated to the United States. In 1865 they settled just outside of Knoxville, Tennessee. Hoping to offset her family's continuing financial troubles, Burnett began to submit her stories to women's magazines. She was immediately successful. In the late 1860s her stories were published in nearly every popular American magazine. Burnett helped to support her family with income from the sale of her stories, even saving enough to finance a trip back to England, where she stayed for over a year. In 1879, Burnett published her first stories for children; two of her most popular are A Little Princess and The Secret Garden. In contrast to an extremely successful career, Burnett's personal life held many challenges. Her son Lionel was diagnosed with tuberculosis at age 15, from which he never recovered. His death inspired several stories about dead or dying children. Burnett lived her later years on Long Island, New York. She died in 1924.

▼▲
I'm the author/artist and I want to review A Little Princess, Unabridged Audiobook on CD.
Back
×