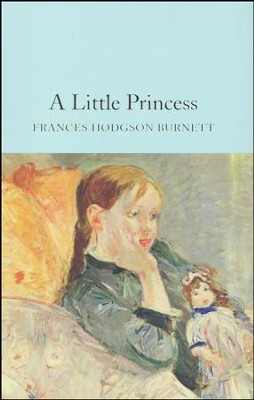 A Little Princess, by Francis Hodgson Burnett tells a story with a dramatic reversal of the traditional 'rags to riches' formula. The story of little Sara Crewe is a magical tale about the power of optimism in the face of adversity, which continues to enchant readers of all ages. This Macmillan Collector's Library edition is a handsome pocket-sized edition that features gilded edges, a cloth-bound imprinted hardcover binding with dust jacket, and a ribbon marker. Illustrations by Reginald Birch and an afterword by Anna South. Measures 4" x 6"; 276 pages. Hardcover

When young Sara Crewe is brought from India to London by her doting father to join Miss Minchin's school, she can have little idea of the changes in circumstance that lie ahead. While at first her life of privilege continues, the tragic death of her father and failure of his business alters everything. In a dramatic reversal of the tradition fictional 'rags to riches' formula, Sara plunges from privilege to penury in the space of one day. Now she is no longer a princess but a beggar, and must depend on the power of her imagination, and the kindness of strangers, to lift her above the misery of her circumstances. She is cast out from the comfort of her rooms as Miss Minchin's 'show pupil' into the chill despair of a lonely garret, and set to endure back-breaking work in the school. But if humility, patience and dignity are virtues to be rewarded, will Sara perhaps experience another reversal in her fortunes? A Little Princess is a timeless and gripping drama about the transformative power of positive thought and the imagination.

Frances Hodgson Burnett (1849-1924) was born in Manchester and spent her early years there with her family. Her father died in 1852, and eventually, in 1865, Frances emigrated to the United States with her mother and siblings, settling with family in Knoxville, Tennessee. In 1872, she married Swan Burnett, a doctor, with whom she had two sons while living in Paris. Her first novel, That Lass o'Lowrie's, was published in 1877, while the Burnetts were living in Washington D. C. Following a separation from her husband, Burnett lived on both sides of the Atlantic, eventually marrying for a second time.

Best known during her lifetime for Little Lord Fauntleroy (1886), her books for children, including The Secret Garden and The Little Princess, have endured as classics, but Burnett also wrote many other novels for adults, which were hugely popular and favourably compared to authors such as George Eliot.

▼▲
I'm the author/artist and I want to review A Little Princess.
Back
Back