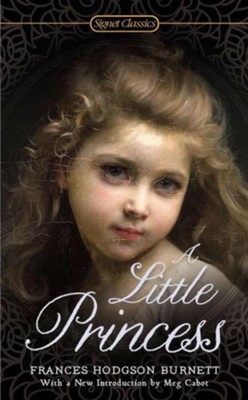 ▼▲
From the world-renowned author of Little Lord Fauntleroy and The Secret Garden, a story about a girl with an unquenchable capacity for forgiveness, trust, and hope&hellip;

A strange little child, with old-fashioned ways and strong feelings, seven-year-old Sara Crewe arrives at Miss Minchin’s London boarding school like a little princess: with splendid clothes of velvet, lace, and silk, beautiful dolls, furs, and even a French maid.  But when a terrible misfortune leaves her penniless and alone, Sara’s spirit never wanes. Here, in one of the best-loved children’s stories in the world, we follow the adventures of the irrepressible Sara as she introduces us to a series of unforgettable characters: the perpetually cross Miss Minchin; the spirited and infinitely loving Large family; and the warmhearted scullery maid Becky. And when a mysterious Indian gentleman moves into the house next door, Sara’s life is transformed once again, in a delightful tale as timeless as the dreams of young girls everywhere.

▼▲
Frances Hodgson Burnett (1849–1924) was born in Manchester, England, and immigrated with her family in 1865 to Tennessee, where she lived near Knoxville until her marriage to Dr. S. M. Burnett in 1873. At eighteen, she began publishing her stories in magazines such as Godey’s Lady’s Book and Scribner’s. At twenty-eight, her novel That Lass o’ Lowries, based on the colliery life she had known in England, became her first success, but she gained international fame with her children’s story Little Lord Fauntleroy (1886), a novel about an American boy who becomes heir to an English earldom. Its hero’s long curls and velvet suit with lace collar became a popular fashion for little boys—and his name lives on as an epithet for overdressed or pompous children. Little Lord Fauntleroy was also successfully dramatized, just as a later novel, Sara Crewe, became the much better-known stage play The Little Princess (1905). In 1909, while laying out a garden at her new home on Long Island, Burnett conceived and wrote The Secret Garden (1911), her best and most enduring work. The author died in Plandome, New York.

Meg Cabot’s books for both adults and tweens/teens have included multiple number one New York Times best sellers, selling over 25 million copies worldwide.  Her Princess Diaries series has been published in more than 38 countries and was made into two hit films by Disney.  Cabot’s numerous other award-winning books include the Abandon trilogy, the Allie Finkle’s Rules for Girls series, and the Heather Wells Mystery series.

Lynne Sharon Schwartz, a native of Brooklyn, New York, has published nineteen books of fiction, nonfiction, essays, poetry and translation, including the novels Rough Strife (nominated for a National Book Award), Balancing Acts, Disturbances in the Field, and In the Family Way. Her reviews and criticism have appeared in many leading magazines and newspapers. She is the recipient of grants from the Guggenheim Foundation, the National Endowment for the Arts, and the New York State Foundation for the Arts, and she has taught in many writing programs here and abroad.

▼▲
I'm the author/artist and I want to review A Little Princess - eBook.
Back
Back