Skip to main content
A. Lincoln: A Biography - eBook
By: Ronald C. White
Stock No: WW12829EB 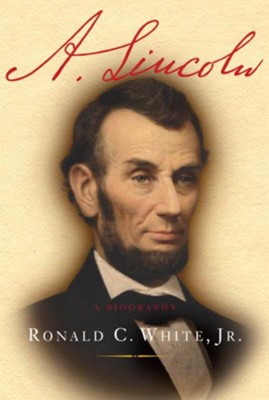 A. Lincoln: A Biography - eBook

▼▲
"If you read one book about Lincoln, make it A. Lincoln."—USA Today

NAMED ONE OF THE BEST BOOKS OF THE YEAR BY
The Washington Post &bull; The Philadelphia Inquirer &bull; The Christian Science Monitor &bull; St. Louis Post-Dispatch.

WINNER OF THE CHRISTOPHER AWARD

Everyone wants to define the man who signed his name "A. Lincoln." In his lifetime and ever since, friend and foe have taken it upon themselves to characterize Lincoln according to their own label or libel. In this magnificent book, Ronald C. White, Jr., offers a fresh and compelling definition of Lincoln as a man of integrity–what today’s commentators would call "authenticity"–whose moral compass holds the key to understanding his life.

Through meticulous research of the newly completed Lincoln Legal Papers, as well as of recently discovered letters and photographs, White provides a portrait of Lincoln’s personal, political, and moral evolution. White shows us Lincoln as a man who would leave a trail of thoughts in his wake, jotting ideas on scraps of paper and filing them in his top hat or the bottom drawer of his desk; a country lawyer who asked questions in order to figure out his own thinking on an issue, as much as to argue the case; a hands-on commander in chief who, as soldiers and sailors watched in amazement, commandeered a boat and ordered an attack on Confederate shore batteries at the tip of the Virginia peninsula; a man who struggled with the immorality of slavery and as president acted publicly and privately to outlaw it forever; and finally, a president involved in a religious odyssey who wrote, for his own eyes only, a profound meditation on "the will of God" in the Civil War that would become the basis of his finest address.

Most enlightening, the Abraham Lincoln who comes into focus in this stellar narrative is a person of intellectual curiosity, comfortable with ambiguity, unafraid to "think anew and act anew."

A transcendent, sweeping, passionately written biography that greatly expands our knowledge and understanding of its subject, A. Lincoln will engage a whole new generation of Americans. It is poised to shed a profound light on our greatest president just as America commemorates the bicentennial of his birth.

▼▲
Ronald C. White, Jr., is the author of two bestselling books on Abraham Lincoln: The Eloquent President and Lincoln’s Greatest Speech, a New York Times Notable Book. White earned his Ph.D. at Princeton and has lectured on Lincoln at hundreds of universities and organizations, and at Gettysburg and the White House. He is a Fellow at the Huntington Library and a Visiting Professor of History at UCLA. He lives with his wife, Cynthia, in La Cañada, California.

"Looking for a comprehensive birth-to-death bio? This is the answer."—USA Today

"Does the world really need another Lincoln bio? White’s exhaustive yet accessible work tips the scales to yes."—People

"This thoroughly researched book belongs on the A-list of major biographies of the tall Illinoisian; it’s a worthy companion for all who admire Lincoln’s prose and his ability to see into, and explain, America’s greatest crisis."—The Washington Post Book World

"This brilliant account of the man and his times will be the standard for biographers."—San Francisco Chronicle

"A page-turner . . . White has managed a complex narrative with the ease and zest of the novelist."—The Buffalo News

"Comprehensive . . . an admirable account of the life in full."—Los Angeles Times

"A vivid and readable narrative . . . [White] is that rarity: a scholar who can tell a good story."—The Miami Herald

"The torrent of Lincoln books past and present . . . means that the bar is necessarily set high. A. Lincoln . . . [is] among the most substantial new entrants."—The Economist

"Lincoln is endlessly chronicled because he is, like the nation he saved, endlessly fascinating. Ronald C. White has written a splendid, sprawling biography of a man we can never know too much about."—Jon Meacham, author of Thomas Jefferson and American Lion

"Ronald C. White, an acknowledged expert on the speeches of Abraham Lincoln, has now taken in hand a full-length biography. To this task he brings the careful reading, patient attention to context, and special sensitivity to complex questions about Lincoln's religion that characterized his earlier books. The result is a first-rate study that will probably be THE biography of the Lincoln Bicentennial Year."—Mark A. Noll, Francis A. McAnaney Professor of History, University of Notre Dame

"Having given us two masterful studies of Lincoln's eloquence, Ronald C. White now delivers a riveting biography. This page-turner narrates all the major events of Lincoln's public career, including his military decision-making, but it does much more. No other book has so completely captured the elusive temperament of the man-- his humility and confidence, heart and intellect, religious spirit and secular sensibility. If you thought you knew Lincoln already, you'll know him better after reading this patient, probing work. A portrait for the ages."—Richard Wightman Fox, Professor of History, University of Southern California

"Ron White’s A. Lincoln is a superb biography of America’s greatest leader. It is fully fleshed, thoughtful, provocative, and scholarly. Lincoln is never out of fashion. After a generation during which three comprehensive one-volume Lincoln biographies appeared—Benjamin P. Thomas’s Abraham Lincoln: A Biography in 1952; Stephen B. Oates’s With Malice Toward None: The Life of Abraham Lincoln in 1977; and David Donald’s Lincoln in 1995—A. Lincoln: A Biography, with its rich detail, will be the standard text for years to come. The author includes the religious connections to his subject like no other biographer. This is a remarkable Lincoln biography by an outstanding writer."—Frank J. Williams, Founding Chair of The Lincoln Forum and Chief Justice of the Rhode Island Supreme Court

"Lincoln’s bicentennial will bring a flood of books about the sixteenth president. Anyone seeking an expansive, thoroughly engaging biography should turn to Ronald C. White’s gracefully written narrative. It does full justice to the complexity and drama of the era and allows readers to understand how Lincoln ultimately triumphed in guiding the nation through its greatest trial."—Gary W. Gallagher, John L. Nau III Professor of History, University of Virginia

"Ronald C. White’s A. Lincoln is the best biography of Lincoln since David Donald’s Lincoln. In many respects it is better than Donald’s biography, because it has incorporated the scholarship of the past fourteen years and is written in a fluent style that will appeal to a large range of general readers as well as Lincoln aficionados. The special strengths that lift this work above other biographies include a brilliant analysis of Lincoln’s principal speeches and writings, which were an important weapon in his political leadership and statesmanship, and on which Ronald C. White is the foremost expert, having written two major books on Lincoln’s speeches and writings.  Another strength is White’s analysis of Lincoln's evolving religious convictions, which shaped the core of his effective leadership, his moral integrity. White’s discussion of Lincoln’s changing attitudes and policies with respect to slavery and race is also a key aspect of this biography. Amid all the books on Lincoln that will be published during the coming year, this one will stand out as one of the best."—James M. McPherson, Pulitzer Prize-winning author of Battle Cry of Freedom

"A beautifully written, deeply personal story of Lincoln’s life and service to his country. Ronald C. White’s moving account is particularly strong in its analyses of Lincoln’s rhetoric and the process by which the president reached decisions."—Daniel Walker Howe, Pulitzer Prize-winning author of What Hath God Wrought: The Transformation of America, 1815-1848

"Each generation requires–and seems to inspire–its own masterly one-volume Lincoln biography, and scholar Ronald C. White has crowned the bicentennial year with an instant classic for the twenty-first century. Wise, scholarly, evenhanded, and elegant, the book at once informs and inspires, with a rewarding new emphasis on the complex meaning and timeless importance of Lincoln’s great words. Brimming with new anecdotes and informed interpretations, White’s superb study brings vivid new life to an American immortal."—Harold Holzer, author of Lincoln: President-Elect, and co-chairman, Abraham Lincoln Bicentennial Commission

▼▲
I'm the author/artist and I want to review A. Lincoln: A Biography - eBook.
Back
Back