A Life Worth Living - eBook
By: Irene B. Brand 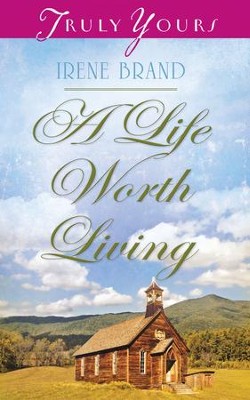 A Life Worth Living - eBook

Although she’s at the center of New York society, Dora Porter still feels there’s something missing in her life. But a textile mill wasn’t what she had in mind. When she learns her father has purchased a Southern mill for her, she is upset. . .and faced with a difficult decision: either she assumes ownership or loses her inheritance.

Allen Bolden never pictured himself with a wife until he aides injured Dora in the mountains near the Biltmore Estate. As a teenager he left his parents’ strained marriage behind and settled down to permanent bachelorhood. Now he can’t wrest his thoughts from Dora’s pretty face.

Desperate to make a success of her business venture, Dora requests Allen’s advice, but their positions are as incompatible as oil and water. Can they find a solution together before disaster strikes the mill and their relationship?

▼▲
IRENE BRAND is a lifelong resident of West Virginia, where she lives with her husband, Rod. Irene's first inspirational romance was published in 1984, and since that time she has had multiple books published. She is the author of four non-fiction books, various devotional materials, and her writings have appeared in numerous historical, religious, and general magazines. Irene became a Christian at the age of eleven and continues to be actively involved in her local church. Before retiring in 1989 to devote full time to freelance writing, Irene taught for 23 years in secondary public schools. Many of her books have been inspired while traveling to 49 of the United States and 24 foreign countries.

▼▲
I'm the author/artist and I want to review A Life Worth Living - eBook.
Back
×
Back
×