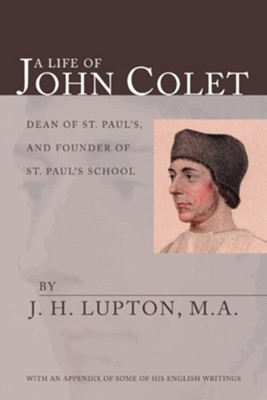 A Life of John Colet

▼▲
John Colet (1467-1519) was Dean of St. Paul's Cathedral and founder of St. Paul's School, London. Colet lectured at Oxford on St. Paul's Epistles, introducing a new treatment by abandoning the purely textual commentary then common, in favor of a study of the personality of St. Paul and of the text as a whole. In 1498 he met Erasmus at Oxford, with whom he immediately became intimate, arousing in him especially a distrust of the later school men. Colet's lectures on the New Testament continued for five years, until in 1504 he was made Dean of St. Paul's. In London he became the intimate friend and spiritual adviser of Sir Thomas More. In 1509 he began the foundation of the great school with which his name will ever be associated. This biography by noted Oxford reform scholar J.H. Lupton was the standard for one hundred years and remains a classic today.

▼▲
I'm the author/artist and I want to review A Life of John Colet.
Back