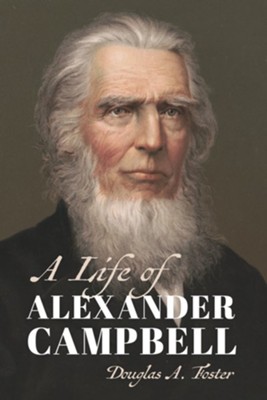 A Life of Alexander Campbell

▼▲
A critical biography of a founder of the influential 19th-century Restoration Movement. The son of a minister and an Irish immigrant, Alexander Campbell worked to establish decentralized congregations that adhered to the practices and purposes of the first-century church. Foster's masterful account captures the man, his times, and the historical, cultural, and spiritual forces that shaped him. 304 pages, softcover from Eerdmans.

The first critical biography of Alexander Campbell, one of the founders of the Stone-Campbell Movement

A Life of Alexander Campbell examines the core identity of a gifted and determined reformer to whom millions of Christians around the globe today owe much of their identity—whether they know it or not.

Douglas Foster assesses principal parts of Campbell’s life and thought to discover his significance for American Christianity and the worldwide movement that emerged from his work. He examines Campbell’s formation in Ireland, his creation and execution of a reform of Christianity beginning in America, and his despair at the destruction of his vision by the American Civil War. A Life of Alexander Campbell shows why this important but sometimes misunderstood and neglected figure belongs at the heart of the American religious story.

▼▲
"In this splendid biography, Douglas Foster presents Alexander Campbell as the complicated man he was—a man who defined himself as a simple, New Testament Christian, but whose view of the Christian religion was deeply shaped by the age in which he lived and by many of his less-than-noble characteristics. In the end, Campbell was a man whom history largely forgot but—as Foster makes clear—a man whose story says so much about the human condition that his life deserves to be known. Any biography that can paint such a highly nuanced portrait of its subject is a work of art, indeed."
— Richard T. Hughes
David Lipscomb University

"Alexander Campbell is one of the most important religious figures in all of American history, yet few of us know much at all about him. A Scots-Irish immigrant who sailed to America in 1809, he quickly helped to found one of the most important movements in this country's spiritual history, known today in scholarly circles as the Stone-Campbell Movement. He was a fascinating man who led a busy, complex, and always controversial life, one that Doug Foster represents here with great skill. This is a good read by a real pro at just the right time."
— Douglas A. Sweeney
Beeson Divinity School

"Douglas Foster successfully illuminates the real and seeming contradictions of this complex nineteenth-century leader’s inflexible teaching of baptism and the Holy Spirit, recognition of the genuine Christianity of persons who did not share his views, and relationships with persons whom he viewed as opponents or threats to his program to advance God’s coming reign of peace and justice that was to begin in the United States."
— D. Newell Williams
Brite Divinity School

"Foster’s monumental biography of Alexander Campbell presents students of the Stone-Campbell Movement with the distilled judgments of an eminent and prolific historian of the tradition. The book teems with fresh insights into Campbell’s stormy Scots-Irish background, his shaping as a charismatic controversialist on the American frontier, his interpretation of the ’American Dream’ and of the labor of restoring the ’ancient order of things’ therein, and the curious chemistry of liberalism and legalism in his agenda for Christian unity. Foster contextualizes Campbell without simply reducing him to a ’product of his times’ and reveals his complex character as a religious reformer in interactions with friends and nemeses alike. Furthermore, Foster brilliantly reveals the heights scaled by Campbell in American Protestant culture while also exposing the epic failure of his response to chattel slavery in his program to reform American society along Christian lines. This will doubtless be the definitive biography of Alexander Campbell for many years to come."
— Paul M. Blowers
Emmanuel Christian Seminary at Milligan College

"What a debt of gratitude we owe to Doug Foster for providing students of American Religion with such a clear, concise, and comprehensive biography of Alexander Campbell. What a blessing!"
— Edward Robinson
Texas College

▼▲
I'm the author/artist and I want to review A Life of Alexander Campbell.
Back
Back