Skip to main content
SPRING CYBER EVENT STARTS NOW: And it's a really BIG deal! Up to 88% off through 5/24>
A Lantern in Her Hand
By: Bess Streeter Aldrich
Stock No: WW384286 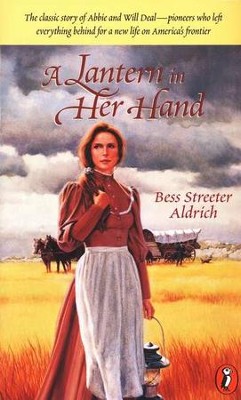 A Lantern in Her Hand

▼▲
Abbie Mackenzie dreamed of becoming a fine lady, devoted to music and art. But at eighteen Abbie found a different dream, abandoning a comfortable life to marry handsome, quiet Will Deal. Together, they eagerly accepted the challenge of homesteading in Nebraska territory. For close to seventy years, readers have cherished Abbie's story--an inspiring story of struggle against unexpected perils, of love and laughter, of the land she helped conquer and the family she raised.

▼▲
The classic story of Abbie and Will Deal—pioneers who left everything behind for a new life on America’s frontier.

Abbie Mackenzie dreamed of becoming a fine lady like her aristocratic grandmother, devoting herself to music and art. But at eighteen Abbie found a different dream, turning away from the promise of a comfortable life as a doctor’s wife to marry handsome, quiet Will Deal. Together, they eagerly accepted the challenge of homesteading in Nebraska territory, where the prairies stretched as far as the eye could see, and only the strongest survived for long.

For nearly 90 years, reader have cherished Abbie’s story—an inspiring story of struggle against unexpected perils, of love and laughter, of the land she helped conquer and the family she raised.

▼▲
Bess Streeter Aldrich was one of Nebraska's most widely read and enjoyed authors. Her writing career spanned forty-some years, during which she published over 100 short stories and articles, nine novels, one novella, two books of short stories, and one omnibus. In her work, she emphasized family values and recorded accurately Midwest pioneering history. A Lantern in her Hand is based on her own family history.

Learn more about her at bessstreeteraldrich.com.

▼▲
"Piercingly beautiful. . . . Aldrich’s pioneer woman was based on her mother, and the integrity of her depiction of life in a sod house in the late nineteeth-century Nebraska speaks to her readers. . . . In her own introduction Aldrich writes of wanting to tell her mother’s story after her mother’s death: ’Other writers had depicted the Midwest’s early days, but so often they had pictured their women as gaunt, browbeaten creatures, despairing women whom life seemed to defeat. That was not my mother. Not with her courage, her humor, her nature that would cause her to say at the end of her life: ’We had the best time in the world.’"—Belles Lettres

"The language is good and sturdy and dotted with imaginative metaphors and similes (’Silence, so deep, that it roared in its vast vacuum’). If the book tries to crowd too much life into 300 pages, well, there was a lot of life: ’We old pioneers,’ Abbie says at the end, ’we dreamed dreams into the country.’"—Milwaukee Journal

▼▲
I'm the author/artist and I want to review A Lantern in Her Hand.
Back
Back