Skip to main content
CUSTOMER APPRECIATION SALE: Thousands of starry deals through 6/22!
A Land of Sheltered Promise
By: Jane Kirkpatrick
Stock No: WW67331 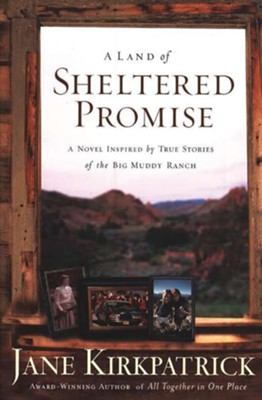 A Land of Sheltered Promise

▼▲
Three women. Three eras. Three miracles! Journey to the Pacific Northwest and meet a lonely sheepherder's wife who awaits the outcome of his trial for murder; a mother who seeks to rescue her daughter from a cult; and a woman who reclaims the cult's abandoned buildings for a Young Life Christian camp. Based on true stories! 400 pages, softcover from Waterbrook.

▼▲
Follow three women from three eras in the Pacific Northwest as they discover a place where miracles really happen—based on true stories.

1901: Plagued by loneliness on the Big Muddy Ranch, a sheepherder’s wife awaits the outcome of her husband’s trial for murder. He is sentenced to life in prison—and she to life without him. But a startling event could redeem their pasts and transform their future.

1984: Against a backdrop of attempted murder, federal indictments, and the first case of bio-terrorism in the U.S., one woman seeks to rescue her granddaughter from within the elaborate compound of a cult that has claimed the land.

1997: On the much-reviled, abandoned cult site, one woman’s skepticism turns to hope when she finds that what was meant to destroy can be used to rebuild—and in the process realizes a long-held dream.

For three women seekers united across time, a remote and rugged stretch of land in the Pacific Northwest proves to be a place where miracles really happen—and the gifts of faith, hope, and charity are as tangible as rocks, rivers, and earth.

▼▲
Jane Kirkpatrick has authored more than twenty books, including The Daughter’s Walk and Where Lilacs Still Bloom. A lively speaker, Kirkpatrick is a frequent keynote presenter for conferences, women's retreats, fund-raisers, and workshops.  Jane believes that our lives are the stories that others read first and she encourages groups to discover the power of their own stories to divinely heal and transform. She lives with her husband, Jerry, in Central Oregon.

▼▲
Congratulations to Jane Kirkpatrick for her 2006 Phoenix Desert Rose Golden Quill Finalists Award for A Land of Sheltered Promise!

“A Land of Sheltered Promise is historical Christian fiction at its best. The reader comes away with a clear vision of the land, of the people who occupied the land, and of a Supreme Being who ties it all together.”
--The Historical Novels Review

"A story of inspiration and courage as only Kirkpatrick can write."
--Roundup Magazine, Western Writers of America


"What does this Jewish reviewer derive from this and Kirkpatrick's previous novels? In people of all faiths or no apparent faith, growth begins with a desperate step in a new direction."
--Harriet Rochlin, author of Pioneer Jews: A New Life in the Far West

▼▲
I'm the author/artist and I want to review A Land of Sheltered Promise.
Back
Back