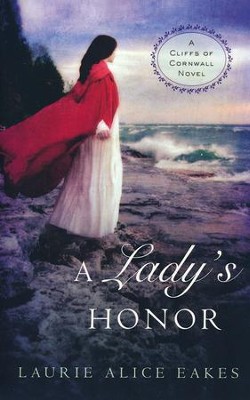 ▼▲
Elizabeth must realize her worth doesn't lie in her inheritance. In order to avoid a forced marriage to a dangerous man, Elizabeth Trelawney flees London. An unexpected stranger arrives to help her, and as they elude her pursuers across Cornwall in the night, Elizabeth realizes her rescuer, Rouan Curnow, is familiar. Their differences in social status kept Rouan from pursuing a courtship with the lady his heart wouldn't let him forget. Now because of dangerous smugglers and local murders, the two are plunged into a reckless alliance that rattles Rouan's fledgling faith in God. The closer they get to Bastian Point---Elizabeth's true home---the more she realizes it is the only place she longs to be.

On the cliffs of 19th-century Cornwall, a spirited, impetuous young woman is torn between the honor of her family and the longing of her heart.

England, 1811. A tarnished reputation. A distant home. A forced engagement to a dangerous man. When Elizabeth Trelawny flees London, she has more than one reason to run. And when her carriage, pursued by her would-be fianc&eacute;, is caught in a storm, she quickly accepts the help of a dark stranger. Anything to get back to Cornwall.

But Rowan Curnow is not exactly a stranger. He’s not quite a gentleman either. Class disparity once kept him from courting Elizabeth . . . even if it didn’t keep him from kissing her.

The couple elude their pursuers and reach Bastion Point, Elizabeth’s future inheritance and the one place she calls home. But in the very act of spiriting her to safety, Rowan has jeopardized Elizabeth’s inheritance?if her grandfather ever learns she spent the night, however innocently, in the company of a man.

Then smugglers unite the pair in a reckless, flirtatious alliance?an alliance that both challenges the social norms Elizabeth has been raised to revere and rattles Rowan’s fledgling faith in God. Elizabeth must choose between the obedience of a child and the desires of a woman: cling to the safety of her home or follow the man she loves.

Since she lay in bed as a child telling herself stories, bestselling, award-winning author Laurie Alice Eakes has fulfilled her dream of becoming a published author, with a degree in English and French from Asbury University and a master’s degree in writing fiction from Seton Hill University. She now has nearly two dozen books in print. Laurie Alice lives with her husband in Houston, Texas, with sundry lovable dogs and cats.

▼▲
I'm the author/artist and I want to review A Lady's Honor, Cliffs of Cornwall Series #1.
Back
×
Back
×