Skip to main content
SPRING CYBER SALE: The sale you've been waiting for! Up to 85% off through 5/25>
A Kite for Moon
By: Jane Yolen, Heidi E.Y. Stemple
Illustrated By: Matt Phelan
Stock No: WW756424 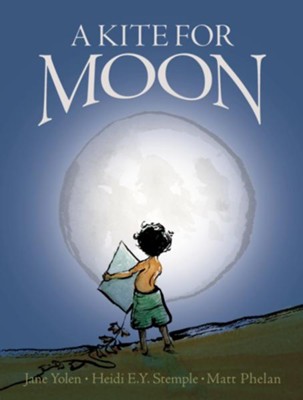 A Kite for Moon

▼▲
A Kite for Moon tells a heartfelt story about a young boy's fascination and unlikely friendship with the moon. With warm and whimsical illustrations, the story begins when the little boy, who is flying his kite, notices a sad Moon. He sends up kites to her, even writing notes to Moon promising he will come see her someday. This promise propels him through the years and years of studying, learning, and training to be an astronaut!

Dedicated to astronaut Neil Armstrong, A Kite for Moon is the perfect children’s book to help celebrate the 50th anniversary of the first United States moon landing. Written by New York Times bestselling author of How Do Dinosaurs Say Goodnight? Jane Yolen and her daughter, Heidi Stemple, this book is a heartfelt story about a young boy’s fascination and unlikely friendship with the moon.

What would it be like if the moon was your friend? Find out as you walk alongside a little boy who journeys through life to achieve his dream of becoming an astronaut. And then blast off with your little one as you zoom to the moon together!

The story begins when a little boy, who is flying his kite, notices a sad Moon. He sends up kites to her, writing notes promising he will come see her someday. This promise propels him through years of studying, learning, and training to become an astronaut. Until &hellip; he finally goes up, up, up in a big rocket ship with a fiery tail.

A Kite for Moon:

Jane has been called the Hans Christian Andersen of America and the Aesop of the twentieth century. She sets the highest standard for the industry, not only in the meaningful body of work she has created, but also in her support of fellow authors and artists. Her books range from the bestselling How Do Dinosaurs series to the Caldecott winning Owl Moon to popular novels such as The Devil’s Arithmetic, Snow in Summer, and The Young Merlin Trilogy, to award-winning books of poetry such as Grumbles from the Forest, and A Mirror to Nature. In all, she has written over 335 books (she’s lost count), won numerous awards (one even set her good coat on fire), and has been given six honorary doctorates in literature. For more information, please visit www.janeyolen.com.

Heidi E.Y. Stemple didn’t want to be a writer when she grew up. It wasn’t until she was 28 years old that she gave in and joined the family business, publishing her first short story in a book called Famous Writers and Their Kids Write Spooky Stories. The famous writer was her mom, author Jane Yolen. Since then, she has published twenty books and numerous short stories and poems, mostly for children.

Matt Phelan is the illustrator of many books for young readers, including Flora’s Very Windy Day by Jeanne Birdsall, Xander’s Panda Party by Linda Sue Park, and The Higher Power of Lucky by Susan Patron, winner of the 2007 Newbery Medal. He is the author/illustrator of the picture books Druthers and Pignic, as well as the graphic novels The Storm in the Barn (winner of the Scott O’Dell Award), Around the World, Bluffton, and Snow White. Matt lives in Ardmore, Pennsylvania.

▼▲
PreS-Gr 1--The allure of the moon has been a favorite theme for picture book authors from Margaret Wise Brown and Eric Carle to Frank Asch and Mordicai Gerstein. Yolen has explored it previously in Owl Moon. Here, writing with her daughter, she imagines the trajectory of astronaut Neil Armstrong's lifelong interest. Flying a kite at the beach in the early morning light, a tousle-haired boy becomes aware of the moon's loneliness: 'The stars were all abed./No one below was singing to her./No one was sending up rockets/or writing poems about her.' He knows how good a hug feels, but the moon is too far, so he sends a note via kite--the first of many. Readers watch the boy grow, gazing through telescopes and learning to drive, to fly, and, finally, to undertake a rocket voyage. At his lunar destination, an outstretched hand signals the fulfillment of his early wish. The text is spare but full of warmth and lyricism. Phelan's lively, flowing inked outlines convey both the steadfast connection between boy and orb and the movement born of passion. The paintings contain subtle and pleasing parallels, e.g., the rocket's orange and yellow exhaust mimics the flame-colored tail of Armstrong's childhood kite; the conclusion echoes the opening while extending the message. Panels effectively collapse time at key moments. VERDICT Smooth pacing and narrative clarity combine with an evocative presentation to make this a first choice to celebrate the 50th anniversary of America's moon landing. --Wendy Lukehart, District of Columbia Public Library -- School Library Journal

What would it be like if the moon was your friend? In the pages of A Kite for Moon, children ages 4-8 will find out as they walk alongside a little boy who journeys through life to achieve his dream of becoming an astronaut. The story begins when a little boy, who is flying his kite, notices a sad Moon. He sends up kites to her, writing notes promising he will come see her someday. This promise propels him through years of studying, learning, and training to become an astronaut. Until he finally goes up, up, up in a big rocket ship with a fiery tail! Beautifully illustrated by Matt Phelan, A Kite for Moon is a collaborative picture book written by the team of Jane Yolen and Heidi E. Y. Stemple. While certain to be an enduringly popular and appreciated addition to family, daycare center, preschool, elementary school, and community library picture book collections, it should be noted for personal reading lists that A Kite for Moon is also available in a digital book format (Kindle, $4.99) and as a complete and unabridged audio book (Dreamscape Media, 9781974969197, $14.99, CD). -- Midwest Book Review, June 2019, Childrens Bookwatch, Picture Books

In a wistful story that honors Neil Armstrong, the moon is feeling lonely: 'No one below was singing to her. No one was sending up rockets or writing poems about her.' But below, a boy at the seashore sees the moon and senses its unhappiness: 'So he wrote on his kite, promising to come some day for a visit.' Phelan illustrates in loose, curling forms that conjure a sense of movement. In sequential panels, the boy is seen peering through a small microscope, receiving a telescope as a teenager, and, as a young adult, gazing through the window at the moon. After learning to ride a bike and drive a car, the boy learns to 'fly a plane and a rocket. Then one day, when he had learned enough, he went up, up, up in a big rocket ship with a fiery tail.' At last he lands on the moon, touching his hand to its surface: 'and thinsp;'Hello, Moon,' he said. 'I've come for that visit.'and thinsp;' Yolen and Stemple remind readers of the simple awe of a most wonderful journey. Ages 4--8. (Apr.) -- Publisher's Weekly

▼▲
I'm the author/artist and I want to review A Kite for Moon.
Back