Skip to main content
SPRING CYBER EVENT STARTS NOW: And it's a really BIG deal! Up to 88% off through 5/24>
A January Bride - eBook
By: Deborah Raney
Stock No: WW42053EB 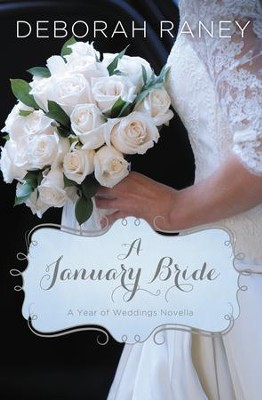 A year’s worth of novellas from twelve inspirational romance authors. Happily ever after guaranteed.

What will happen when novelist Madeleine Houser’s "pen pal" friendship with a lonely widower takes an unexpected turn?

Who can work in a house that's overrun by contractors and carpenters? Not Madeleine Houser, a successful novelist who gladly accepts the help of her octogenarian friend, Ginny, to arrange for a temporary office in the charming bed and breakfast owned by Ginny's friend, Arthur. Maddie’s never met the innkeeper—but a friendship grows between them as Maddie and Arthur leave messages for each other each day. To Maddie’s alternate delight and chagrin, she seems to be falling for the inn’s owner—a man who's likely many years her senior—and who she’s never even met.

Arthur Tyler is a college professor who lost his young wife to cancer. Together they ran the bed and breakfast where Art lives, but without his wife, the house is missing warmth and cheer. He jumps at the chance to have author Madeleine Houser use the space that was once filled with guests. He, too, begins to enjoy the daily exchanges with Maddie, but a series of misunderstandings lead him to believe she’s far from being a prospective date—even if he were ready to date again, which he’s not.

When Maddie and Art finally meet and discover one another’s identity, sparks fly. Even so, they each have obstacles to overcome in order for this winter romance to blossom.

Deborah Raney’s first novel, A Vow to Cherish, inspired the World Wide Pictures film of the same title and launched her writing career after twenty happy years as a stay-at-home mom. Deb now has more than two dozen published novels. She and her husband, Ken Raney, recently traded small-town life––the setting of many of Deb's novels––for life in the (relatively) big city of Wichita, Kansas. They love traveling to visit four children and five small grandchildren who all live much too far away. Visit Deb on the web at www.deborahraney.com. Twitter: @authordebraney

▼▲
I'm the author/artist and I want to review A January Bride - eBook.
Back
Back