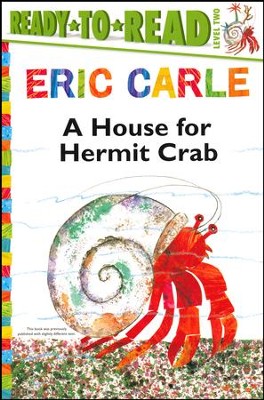 A House for Hermit Crab

▼▲
As the Hermit Crab gets bigger, he outgrows his shell and must shed his old shell and seek out a new, bigger shell to make his home. Join Hermit Crab as he finds a new shell, though a bit plain, and sets out to decorate it and make it truly his. This Level 2 beginning reader is perfect for developing readers with longer sentences, simple chapters, and high-interest vocabulary words.

In this classic story from Eric Carle, Hermit Crab grows out of one house after another as he searches for the perfect home. Children who must change schools, move to a new town, or even graduate to a new grade in school will relate to Hermit Crab’s situation and take heart as they see that growing up isn’t really so scary after all.

Filled with whimsy and wisdom—and based on the true behaviors of the hermit crab—this modern classic features Eric Carle’s trademark vibrant collage illustrations and lively text that has been adapted into a Level 2 Ready-to-Read edition, making it ideal for newly independent readers.

▼▲
Eric Carle (1929–2021) was acclaimed and beloved as the creator of brilliantly illustrated and innovatively designed picture books for very young children, including Papa, Please Get the Moon for Me; Have You Seen My Cat?; and TheTiny Seed. His best-known work, The Very Hungry Caterpillar, has been translated into seventy languages and sold over fifty-five million copies. Carle illustrated more than seventy books, many bestsellers, most of which he also wrote, and more than 170 million copies of his books have sold around the world. In 2003, Carle received the Children’s Literature Legacy Award for lifetime achievement in children's literature. In 2002, Eric and his wife, Barbara, cofounded The Eric Carle Museum of Picture Book Art (CarleMuseum.org) in Amherst, Massachusetts, a 40,000-square-foot space dedicated to the celebration of picture books and picture book illustrations from around the world, underscoring the cultural, historical, and artistic significance of picture books and their art form. Eric Carle passed away in May 2021 at the age of ninety-one. His work remains an important influence on artists and illustrators at work today. Find out more at Eric-Carle.com. Eric Carle is an internationally bestselling and award-winning author and illustrator of more than seventy books for very young children including his most well-known title The Very Hungry Caterpillar. Born in Syracuse, New York, Eric Carle moved to Germany with his parents when he was six years old. He studied at the prestigious art school, the Akademie der bildenden Künste, in Stuttgart before returning to the United States, where he worked as a graphic designer for The New York Times and later as art director for an international advertising agency. The Very Hungry Caterpillar, now considered a modern classic, has sold more than 41 million copies and has been translated into sixty-two languages. With his late wife, Barbara, Eric Carle cofounded The Eric Carle Museum of Picture Book Art in Massachusetts in 2002. Eric Carle divides his time between the Florida Keys and the hills of North Carolina.

▼▲
I'm the author/artist and I want to review A House for Hermit Crab.
Back
Back