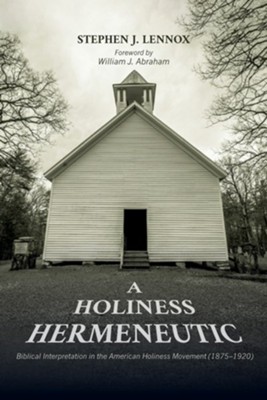 America in the late nineteenth century was undergoing enormous societal shifts. Immigration and urbanization were changing the face of the country. New discoveries and new perspectives on old verities stretched its mind and stirred its soul. The recently concluded Civil War left America bloodied, its self-confidence bruised, and its capacity for controversy weakened. American churches responded to these upheavals in different ways with long-lasting consequences. The reaction of one small branch of American Protestantism rooted in the broader stream of Methodism opens a window into these troubled times.

This book explores how the American holiness movement navigated the societal maelstrom and the role the Bible played in charting its course. The holiness movement’s response illustrates the interaction between the Bible and culture. It sheds light on the development of the movement’s younger cousin, Pentecostalism. It also adds texture to the Fundamentalist-Modernist Controversy, an important struggle that marked the early decades of the twentieth century and continues to shape America today.

▼▲
I'm the author/artist and I want to review A Holiness Hermeneutic.
Back
×