Skip to main content
Get Christmas Ready Sale — Over 1,000 deals thru 9/26!
A History of Victorian Literature - eBook
By: James Eli Adams
Stock No: WW27324EB 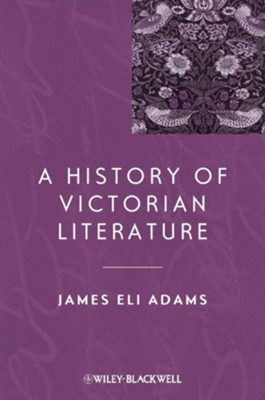 A History of Victorian Literature - eBook

▼▲
Incorporating a broad range of contemporary scholarship, A History of Victorian Literature presents an overview of the literature produced in Great Britain between 1830 and 1900, with fresh consideration of both major figures and some of the era's less familiar authors. Part of the Blackwell Histories of Literature series, the book describes the development of the Victorian literary movement and places it within its cultural, social and political context.

James Eli Adams is Professor of English & Comparative Literature at Columbia University. He is the author of Dandies and Desert Saints: Styles of Victorian Masculinity (1995); the general editor of the four-volume Encyclopedia of the Victorian Era (2004); and co-editor of Sexualities in Victorian Britain (1996).

"This is a beautifully written, truly intelligent book that understands the Victorians. Reading this volume was a pleasure that brought home rather forcefully the relatively functional nature of so much professional academic prose." (Victorian Studies, Spring 2010)

"This elegant and far-reaching book offers a surprising source of optimism to those working in the humanities in Higher Education." (Dickens Quarterly, 2010)

"Throughout his prose is clear and unpretentious--in short, entirely appropriate for his intended audience. Though specialists may quibble over what Adams chooses to omit from this concise account, this book is a remarkable achievement." (CHOICE, October 2009)

"...its breadth of coverage is staggering. It includes all the major figures and genres of the age, hosts of relatively minor authors and works, and all the important subgenres. Also, by placing the individual works in their ever-shifting literary and cultural milieus, it provides a depth of insight lacking in more narrowly conceived studies.... Also, it may well stimulate an exploration of the work of such important but neglected authors as Ainsworth, Disraeli and Bulwer-Lytton, not to mention such utterly forgotten authors as Catherine Gore. Adams, in fact, seems to have read so much of the relatively minor and currently neglected literature of the entire period, and writes about it with such gusto and infectious enthusiasm that he extends the breadth and depth of the entire field of Victorian studies and will doubtless inspire specialists as well as less advanced students of the period to read works they might otherwise have viewed as expendable. The book is indeed so replete with valuable insights into so many works and authors that the reader who has taken in its chronological sweep by reading from the introduction through the epilogue will undoubtedly return over and over again via the index to review the readings of particular works". (New Books Online, September 2009)

▼▲
I'm the author/artist and I want to review A History of Victorian Literature - eBook.
Back
Back