A History of the Jews
By: Paul Johnson 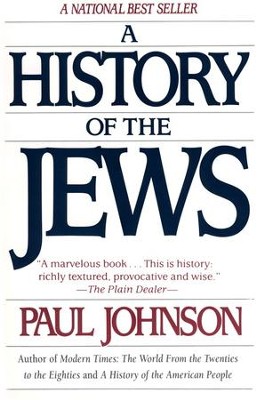 A History of the Jews

▼▲
The Jews are the most tenacious people in history. This brilliant 4000 year survey covers not only Jewish history but the impact of Jewish genius and imagination on the world. This book objectively considers the most intractable of all human questions: what are we on earth for? Is history merely a series of events whose sum is meaningless? Is there no fundamental moral difference between the history of humans and the history of ants? Or is there a providential paln of which we are, however humble, the agents? No people has ever ever insisted more firmly than the Jews that history has a purpose and humanity a destiny. At a very early stage in their collective existence they believed they had detected a divine scheme for the human race, of which their own society was to be a pilot. They clung to their role with heroic persistence in the face of savage suffering. The Jewish vision became the prototype for many similar grand designs for humanity, both divine and man-made. Therefore, the Jews stand right at the centre of the perennial attempt to give human life the dignity of a purpose.

▼▲
A national bestseller, this brilliant 4000 year survey covers not only Jewish history but he impact of Jewish genius and imagination on the world. By the author of Modern Times: The World From the Twenties to the Eighties.

Paul Johnson is a historian whose work ranges over the millennia and the whole gamut of human activities. He regularly writes book reviews for several UK magazines and newspapers, such as the Literary Review and The Spectator, and he lectures around the world. He lives in London, England.

▼▲
I'm the author/artist and I want to review A History of the Jews.
Back
×
Back
×